Home Local News A Garden By Any Other Name…. by Wendy Johnson, a Hopkins County Master Gardener
Local News

A Garden By Any Other Name…. by Wendy Johnson, a Hopkins County Master Gardener 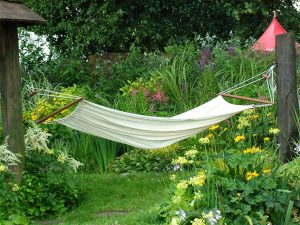 Do you have a specialized garden where you live? These are gardens planted for a specific purpose: gardens such as a vegetable, herb, rose, rock, butterfly, hummingbird and many more. I created my own special garden. I wanted to put up a hammock next to my house for relaxation and also wanted to have some plants in that area too. This is what I did for my “hammock garden”, as in – a garden designed around a hammock.

I put the hammock garden in the east facing backyard, next to the house. I have an open space there because of the way the house is designed. This area measures 25 feet x 12 feet. Because of some nearby woods and my own tall Aristocrat Pear tree my garden area is in shade from sunrise to about 11 AM and in shade again from 4 PM on. The house creates the afternoon shade. I can get comfortable morning and evening hammock time in this area.

The first thing to do was to decide the size of the garden. I made mine to cover the open area for length and for depth it is about a foot deeper. Two sides of the area were already edged because of the house foundation and the small rise of the open porch. The remaining short side was edged perpendicular to the house. The remaining long side was edged with a gently curved arc. Next, remove the lawn turf and test the soil to see if any amendments need to be added to improve it.

I decided to put the hammock about in the middle of the area on a slight diagonal. My husband had a clever idea for hanging the hammock. He used round metal fence posts to hang it from. But instead of sinking these posts permanently into the ground using cement as an anchor, he decided to put Schedule 80 PVC tube into the ground that were just slightly larger in diameter than the metal posts. The PVC was sunk two feet down and cut off about one inch above the ground. Drop a few inches of pea gravel into the PVC. Now the metal posts can slide into the PVC. And conveniently when the hammock is taken down, the metal posts can be easily removed too, if desired. We followed the directions that came with the hammock to decide how far apart to put the posts. Next “U” bolts were attached an inch from the top of the metal posts to hang the hammock using weight appropriate devises. We put fence post caps on top of the metal post to keep water out.

One thing we learned is the metal posts used to hang up the hammock may bend slightly due to weight when occupied. So, we doubled the tubes. Our original post measured 2 and 3/8 inches in outside diameter. Into this we added a second post that measured 2 and 1/8 inches outside diameter. Thus the posts were “sleeved”. The inner posts only need to be about ¾ the length of the outer posts.

Now it was time to put some plants into the garden. With the soil tested and amendments added, I decided upon five plants. In the garden at the southern corner up next to the house is the cube shaped heat exchanger of my AC unit. I wanted to have some visual blockage of this. I knew I could not do too much in blocking the view because a repairman would need to get to the unit to service it. I chose one plant, the evergreen Gulf Stream Nandina. I carefully placed it and have been pleased ever since. This plant was small to begin with but grew in both height and width to create a natural visual block of the AC. Plus the plant is soft and pliable so if the repairman bumps into it, neither he nor the plant are hurt.

Next along the foundation wall under double set windows I put in three plants – an outside pair of Holly Ferns and in the middle a Dietes. My rule of thumb is to put plants 18 to 24 inches away from the foundation wall. This is good for the plant and for any painter, window washer or other worker who needs to work around the outside of the house. The Holly Ferns seem to do alright getting sun from eleven to two o’clock. I may be pushing them with that sun but so far all is working out. This type of fern is fairly cold hardy. I loose a few fronds to extreme cold but the plant is evergreen all year and recovers well in spring. The Dietes is an interesting plant. It is upright in growth with tall narrow leaves that grow directly out of the ground. It provides a nice contrast to the bushy ferns. It can be somewhat evergreen. Some very cold spells will kill some or all of the leaves but it comes back well in spring. The Dietes is supposed to bear flowers but mine does not. I am fine with no flowers as I like its foliage.

On the inside corner of the garden, formed by the house layout, I put in a Moon Bay Nandina. This is a small evergreen shrub. I did not want a tall robust Nandina like the Gulf Stream in this spot because it is next to the short side of the open porch. Filling in this corner with the Moon Bay gives my garden a softer, less abrupt look.

My last permanent plant is a Stella de Oro Daylily. It is by the northern, outside corner of the garden where the porch roof support post is. I chose to put a plant there to again soften the look of an abrupt corner and

to take emphasis away from the post. Plus, it adds a pop of color to the area. This Daylily’s leaves die back to the ground with strong freezing temperatures but returns heartily and the short new growth can better handle freezing weather.

On the southern outside curving corner of the garden I put a few vegetable plants early each spring. We enjoy the produce from these plants. The soil here is heavily amended to support fruit production.

I had drip irrigation put in the areas where there are plants. In my opinion, soil level drip irrigation is better for plants and less wasteful of water. Since this was a conversion from above ground spray type of garden irrigation to the drip type using a special kind of tube, there was little disturbance to my plants. It is better to install irrigation before the plants are added. There is no irrigation where the hammock is located.

Finally, I put down mulch to help the soil stay moist longer, to discourage weed growth and to top dress the area for walking upon.

FYI: I keep all plant tag information which is why I remember what my plants are. This is a good idea for checking up on specifics about your plant. The two Nandina I mentioned – the Gulf Stream and Moon Bay, are hard to find locally. I was lucky to do so.