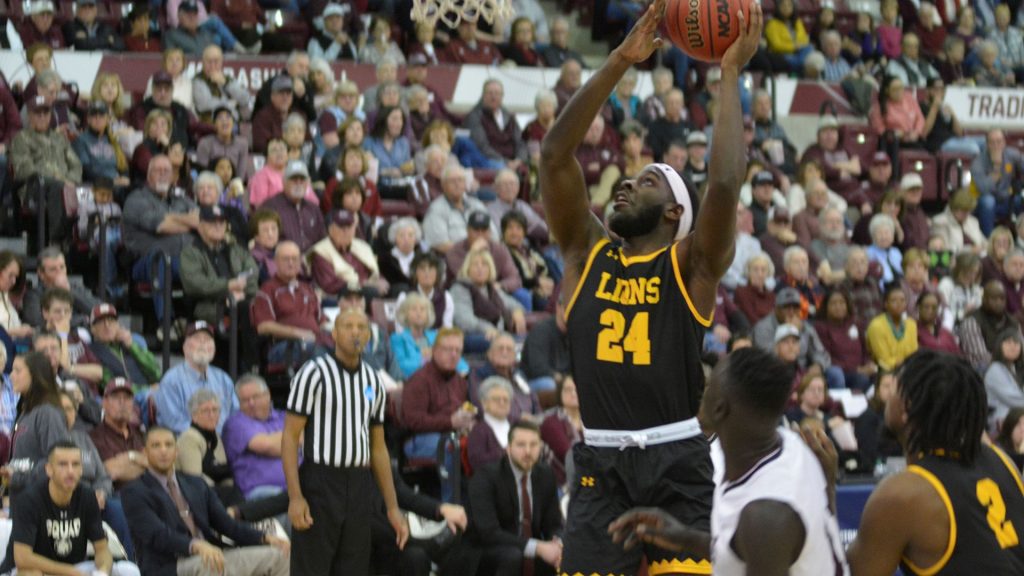 The Texas A&M University-Commerce men’s basketball team fell 77-61 to No. 3 West Texas A&M on Saturday night in the semifinal round of the NCAA Division II South Central Regional Tournament. After a close first half, the Lions fell behind in the second half and could not overcome the deficit.

The loss brings the Lions to 24-9 on the season and their NCAA Tournament run comes to a close. The Buffaloes improve to 33-3 and they advance to the Regional Final game.

The Lions close their third consecutive season with a berth into the NCAA Regional Tournament and their fourth season advancing to the second round of the NCAA Tournament.

HOW IT HAPPENED
It was back and forth throughout the first half as the lead changed hands multiple times. The Buffaloes would score and the Lions would respond, and vice versa. The Lions took their first lead of the game on a step back three from Reid. Midway through the half, the score was tied at 10.

Rooks led the Lions with seven in the first half. Reid and Conrod added five apiece while Terrell had four.

The Buffaloes pushed their lead to seven early before the Lions battled back to begin the second half. Rooks hit a three and Brown had a shot in the lane, plus a free throw. Rooks hit a step back three to tie the game at 34 with 16 minutes left in the game. Brown had multiple trips to the foul line as the teams again were tied at 37.

WT then went on a 14-2 run to take a 12-point lead midway through the half. The Lions again cut the lead down to single digits before another WT run pushed the lead to 16 points. The teams battled back and forth for the rest of the contest but the Lions could not cut into the deficit.

POSTGAME THOUGHTS FROM:
Head Coach Jaret von Rosenberg
On the team’s first half battle: “In the first half, the game plan went exactly like we wanted it to. It was a low possession game. I thought we missed some good looks and some layups and gave them some offensive rebounds and some extra possessions. That’s the five-point advantage they had. But 30-25 in their building, playing at the pace we wanted, I thought it was really good.”
On the run WT went on to establish a lead: “It’s what West Texas has done to a lot of people, but we had a chance to go up to take a lead with about 13 minutes left from the free throw. We weren’t able to convert and get a lead and then they came down and hit a three. Then we had some miscues, missed some shots and didn’t get back in transition, and then they went on a quick run and stretch it to 10 points. Then you have to change the game plan a little bit. We had to speed up a little bit, which helped our offense but made us a little loose defensively. They were able to get points in the paint and that made it get out of reach for us in the end.”
On the legacy of the four seniors that came in with him: “You talk about Reggie, Willie, Trey, Serge, they obviously aren’t going to put on the uniform again, but what they started here with me will carry on way after this.”

Reggie Reid
On fighting through injury to play in the tournament: “My mentality was just to get healthy and get back as soon as possible to help my teammates. I wanted to help our team win a conference championship and make a deep run in the NCAA Tournament. It came to a halt tonight. But I’m happy with our effort. It was a great season.”

Willie Rooks
On the battle through the game: “We felt good. Like coach said, we wanted to slow the game down and we were doing that in the first half. Then they went on that run and they were hitting shots. And we just weren’t making shots. That’s really what happened.”