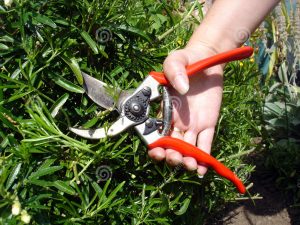 Winter in north Texas is never quite what we expect…freezes may be early or late, and there will almost always be a week or two that leads us to think that Spring-time is already here.  The average date of the last freeze in Hopkins County is generally mid-March, so there is still an opportunity to prune our landscapes to get shrubs and trees off to a healthy start for the growing season.  Pruning, the cutting off of unwanted, damaged,   or unneeded limbs, is vital to the health and productivity of plants. Pruning may be used to train a plant to grow in a certain shape, to enhance flowering, fruiting and growth, or to control and restrict growth.

All pruning cuts should be made clean and smooth to aid in rapid healing of the wound.  Most woody plants have buds, and pruning cuts should be made just above a bud.  When pruning back to a bud, keep in mind that a bud pointing to the outside of the plant is more desirable than one pointing inside, because it will allow the plant to grow outward and allow for adequate air-flow through the plant.  Future growth of the limb is determined by the direction of the bud.

Shrubs may be thinned to allow more air circulation and sunlight.  Weak and dead stems should be removed.  If two limbs are rubbing together, one or both should be cut back from their origin with the parent stem or the ground.  Heavier pruning may be done to give an overgrown shrub an opportunity to rejuvenate as this will allow room for new growth as the weather warms.  As much as one-third of the oldest, tallest branches may be cut off at or slightly above ground level.

Roses should be pruned three to four weeks before the last killing frost.   After a few weeks of cold weather in early winter, roses may begin putting on new growth in the warm days of mid-winter.  Pruning too early risks damage to this new growth from a late freeze.  New growth on an unpruned rose is at the top of existing canes rather than from the base of the plant.  Waiting until the last several weeks of winter to prune these old canes protects new growth from the base of the rose bush from being damaged or killed by a late freeze.

Basic rules for pruning roses are to remove any canes that are damaged, remove one or both of two canes that may be rubbing together, and any canes that are spindly or smaller in diameter than a pencil.  For climbing roses, old canes should be pruned to allow new canes to produce more desirable growth and flowers.  Antique roses require less pruning, as they typically have a rounded shrub-like shape.  Aside from removing damaged branches, minor trimming may be done to facilitate growth.

More information on pruning, roses, and horticultural topics is available at: