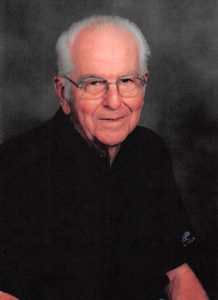 Warren Eugene Chancellor, age 94,passed peacefully from this Earth to his God’s Heavenly embrace on Monday, February 18, 2019, at his home in Austin.  He was born on March 11, 1924, in Cooper, Texas, the son of Walter Eugene and DaisieChancellor.

At age 17, following his graduation from Cooper High School, he accepted a job at Miller’s Pharmacy as a clerk and “soda skeet” while awaiting the wartime draft.  It was there that he formed his desire to pursue Pharmacy as a profession.  But first would come his service to his country.

Inducted into active service in March of ’43, he trained in Medford, OR, before joining 11,000 fellow soldiers on their trans-Atlantic voyage aboard the Queen Mary to prepare for the invasion to come.  Assigned to the Medical Detachment of the 300th Engineer Combat Battalion, he landed at Utah Beach, Normandy on June 11th, five days after D-Day.  He and his company faithfully and bravely built bridges andfought their way across France, Belgium and Germany, including the Battle of the Bulge.

After his Honorable Discharge in Jan. ‘46, he returned to Texas to begin his college education at East Texas State in Commerce.  It was there that he met the love of his life, Bettye Sue (Suzy) Wood from Sulphur Springs.  Their love-at-first-sight resulted in their marriage on September 1, 1946 – a bond that lasted 71 years before her passing in December, 2017.

After only a year at ETSU, Warren and Suzy moved to Austin where he resumed his studies at The University of Texas, receiving his degree in Pharmacy on June 1, 1950.  He soon accepted his first job at Nelson’s Pharmacy in Sulphur Springs with a beginning salary of $325.00 per month!  He worked at Nelson’s for 12 years before becoming the store manager at Nelson’s Corner Drug on the square, where he remained through 1975.

In 1976, he purchased the former Nix Pharmacy in Emory, TX, and opened Warren’s Pharmacy where he remained until his retirement in 1995.

Throughout those 45 years as a Pharmacist, he typically worked six days a week, but still somehow found time for his family, coin collecting, woodworking, golf, civic involvement, Longhorn sports, poker, and the countless friendships that seemed to naturally come with his position in the community.

Soon after his retirement, Warren and Suzy moved to Sun City Georgetown, where family, golf, travel, Longhorn Sports, poker, and friends old and new took their well-earned place at center stage.  Their travels with friends and family took them to various worldwide destinations, and oftenfound them following their beloved Longhorns – including an amazing 69 consecutive trips to Dallas for the Texas/OU game!

Also while in Sun City, the couple’s strong faith, always a cornerstone of their lives, led them to play an instrumental role in the founding of Wellspring UMC in Georgetown.

Their last three years together were spent at Brookdale Westlake Hills in Austin.  There they once again proved their true and genuine hearts as they embraced their new surroundings and endeared themselves to both residents and staff.  And to the Staff at Brookdale, the family extends its warm and heartfelt thanks for the compassion and care shown to both Suzy and Warren in their final years.

While all who knew him will miss his friendship, his love, his smile, and his mischievous wit, we are all so very blessed to have had him grace and shape our lives.

A Funeral Service will be held at 3:00 p.m. on Sunday, February 24th, at the Myra Wilson Chapel located at the Sulphur Springs City Cemetery.  Interment with Military Honors will immediately follow.

In lieu of flowers, the family has suggested that memorial gifts be directed to Honor Flight (www.honorflight.org), Wellspring UMC Georgetown (www.wellumc.org), or the Parkinson’s Research Charity of your choice. Arrangements are under the direction of West Oaks Funeral Home. www.westoaksfuneralhome.com