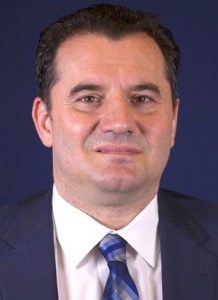 Dallas Police Department said in a press release that the charges are related to a Dallas-area massage businesses that had been engaging in illicit activity. Investigations into the businesses found prostitution being carried out. All of the businesses were connected to the same owners and ownership group and DPD arrested three other men on the same charge.

According to the Dallas Morning News, Maric owned a massage parlor named Charming in northwest Dallas. The DMN report says that the female employees were sleeping on mattresses on the floors of the establishments and living in the buildings. The other men arrested are owners of similar establishments. DMN claims that the four men arrested are suspected of human trafficking and “Officials took several people into custody at the northwest Dallas building and are working to determine whether they are victims of sex trafficking.”

Texas A&M University-Commerce said in a statement that Maric is no longer a university employee. Maric had been employed at A&M-Commerce since 2017.

Arkansas Couple Arrested After DPS Discovers Over 4,000 Grams of Methamphetamine During I-30 Traffic Stop