Arkansas Couple Arrested After DPS Discovers Over 4,000 Grams of Methamphetamine During I-30 Traffic Stop 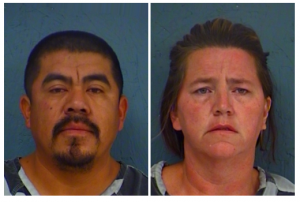 Texas DPS officers arrested Victor and Amber Hernandez of Arkansas on Wednesday afternoon after discovering 4,003 grams of methamphetamine in their vehicle during a traffic stop on I-30.

Officers conducted a traffic stop on the couple after observing traffic violations. The couple allegedly showed signs of nervousness and told officers about implausible travel plans. Victor consented to a search of the vehicle and four clear zip=lock bags containing approximately 4,003 grams of methamphetamine was discovered.

Also in the vehicle were a 17 year old male and a 5 year old male. Th=he bags were discovered in the second row floorboard underneath the 5 year old’s feet in a bag containing the child’s clothing.

The couple was arrested and charged with Possession of a Controlled Substance Greater than 400 grams, a First Degree Felony. They are currently held at Hopkins County Jail on $75,000 bond each.