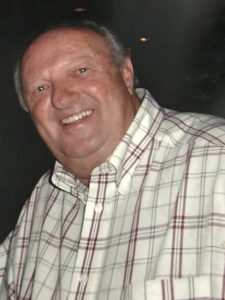 Funeral Mass of Christian burial for James Edward (Jim) Tucker, age 82, of Mt. Vernon will be held at 10:00 a.m., Monday February 18, 2019 at St. James Catholic Church in Sulphur Springs with Father Freddy CelanoPenaloza officiating. Interment will follow at Mt. Vernon City Cemetery with his grandsons serving as pallbearers. Visitation will be from 6:30 to 8:00 p.m., with Rosary beginning at 6:00 p.m., on Sunday February 17, 2019. Jim passed away on February 14 at his residence.

Jim was born on August 20, 1936 in Stone, Kentucky the son of Coy Lee Tucker and Mary Frances Crouch Tucker. He married Betty Weigel on October 8, 1955 in Cincinnati, Ohio.

He attended school and graduated from Mt. Healthy High School in Cincinnati in 1954. During that time he lettered in football, basketball and baseball. He attended the University of Cincinnati. He enlisted in the National Guard in 1954, completed US Army Armor School at Ft. Knox, Kentucky and was commissioned as an officer in 1961. He was honorably discharged as a Captain in 1967.

His background in drafting and engineering lead him to work in the construction industry, primarily petrochemical refinery construction, as a sales representative. His worked took him all over the United States, Europe, Central & South America and the Middle East.

He was a member of the Catholic faith, and most recently the Sacred Heart Parish. He was active in the Knights of Columbus in the parishes in Humble and Mineola. Jim was a volunteer with the Hopkins Country Memorial Hospital Auxillary from 2006 to 2014.

Jim was an avid golfer. HIs work and golf often went hand in hand as he represented his various employers as a player in Pro-Am tournaments. At the age of 75 he earned his one and only hole-in-one which he was able to share with his son, Jay. Jim passed on his love for golf to his sons and grandchildren.

Memorials may be made to Sacred Heart Catholic Church, 406 TX Hwy 37 S, Mt Vernon, Texas 75457. Arrangements are under the direction of West Oaks Funeral Home. www.westoaksfuneralhome.com

Daily Devotional from The Way Bible Church for February 16th, 2019