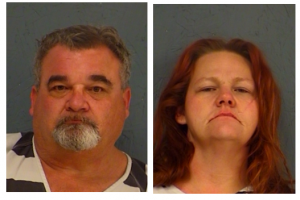 On Friday, Hopkins County Sheriff’s Office Investigator Sheets observed a vehicle at Braum’s in Sulphur Springs and knew that the driver was a known methamphetamine dealer. Investigator Sheets observed a hand to hand transaction between Johnny Liston Powell, 52, and another person. While Powell conducted the transaction a female, Melinda Wesson, was observed in the parking lot of Pizza Inn. Wesson appeared to be conducting surveillance.

After the transaction had been completed, Powell crossed the street to pick up Wesson. Officers conducted a take down of the vehicle once Wesson got into the vehicle. 2.4 grams of methamphetamine and a forged $100 bill were found in the vehicle during the probable cause search. The methamphetamine sold at Braum’s was also recovered and showed a weight of approximately 6.6 grams. During the sale of the methamphetamine there were two school buses in the Braum’s parking lot with students walking around. The restaurant is next door to Bowie Elementary School.

Daily Devotional from The Way Bible Church for February 2nd, 2019