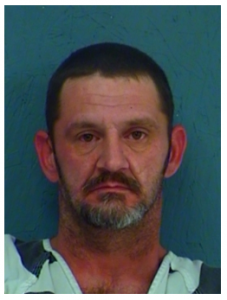 Shawn Allen Long, 35, was arrested yesterday morning for Aggravated Assault with a Deadly Weapon-Family Violence and Possession of a Controlled Substance after allegedly throwing a woman from a moving vehicle.

Hopkins County Sheriff’s Office Deputies received a call that an assault had occurred and were able to ascertain that the victim was thrown from a vehicle driven by Long. Deputies learned of locations that Long might be proceeding to and sat on the on the locations waiting for his arrival.

Long was located and detained. He stated the victim was using methamphetamine in a hotel room they were sharing. Long claimed the two were in a verbal altercation and he attempted to leave. He then claimed the victim jumped from the vehicle while he was making a turn and he left her there.

The victim told officers that Long punched her several times before being forcefully pushed out of the moving vehicle. Long stated that the two were in a dating relationship and “she hit me, too.”

Long was placed into custody and officers performed an inventory of the vehicle. Officers discovered a green chewing tobacco bag containing approximately 2.9 grams of methamphetamine and paraphernalia including syringes, glass pipes, make-shift tourniquets, and a burnt spoon.

Young is charged with Aggravated Assault with a Deadly Weapon-Family Violence and Possession of a Controlled Substance and is currently being held at Hopkins County Jail. Bond has not been set.

The victim was transported to Christus Mother Frances E.R. by EMS.