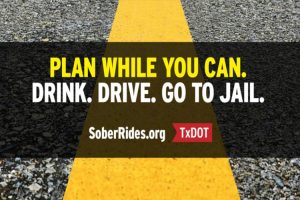 With the excitement of Super Bowl weekend just days away, the Texas Department of Transportation is urging football fans to “Plan While You Can”  for a sober ride before enjoying game-day watch parties and other activities that may involve alcohol.

“Super Bowl weekend is a potentially dangerous time for alcohol-related crashes,” said TxDOT Executive Director James Bass. “With so many transportation options available, there is absolutely no excuse to drink and drive. If you plan to drink alcohol, plan ahead for a sober ride. It’s a game plan that could save a life.”

During last year’s Super Bowl weekend,* there were 258 alcohol-related crashes in Texas. Those crashes killed eight people and seriously injured another 21.

Drivers under the influence of alcohol not only risk killing or seriously injuring themselves or others, but also face up to $17,000 in fines and fees, jail time and loss of their driver’s license. As always, TxDOT urges drivers to find alternatives to drinking and driving, such as:

Since Nov. 7, 2000, at least one person has died on Texas roadways every single day. In an effort to end this deadly streak, TxDOT encourages everyone to drive sober, buckle up, slow down, drive to conditions and respect other drivers. Driver education efforts such as “Plan While You Can” are key components of TxDOT’s #EndTheStreakTX awareness campaign that reminds drivers it’s a shared responsibility among all of us to keep our roads safe. Please help us end the streak.