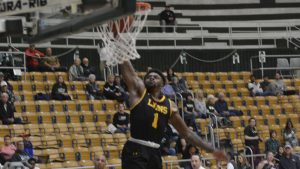 With their 6-1 record, the Lions are a half game back of first place in the conference standings. They will host Western New Mexico on Thursday at 7:30 p.m. and UT Permian Basin on Saturday at 4 p.m. as the Lions complete the first half of their conference season. Tickets for the games are available at WeAreLionsTix.com, by calling (903) 468-8756 or by visiting the Lion Sales & Service Box Office in the Field House.