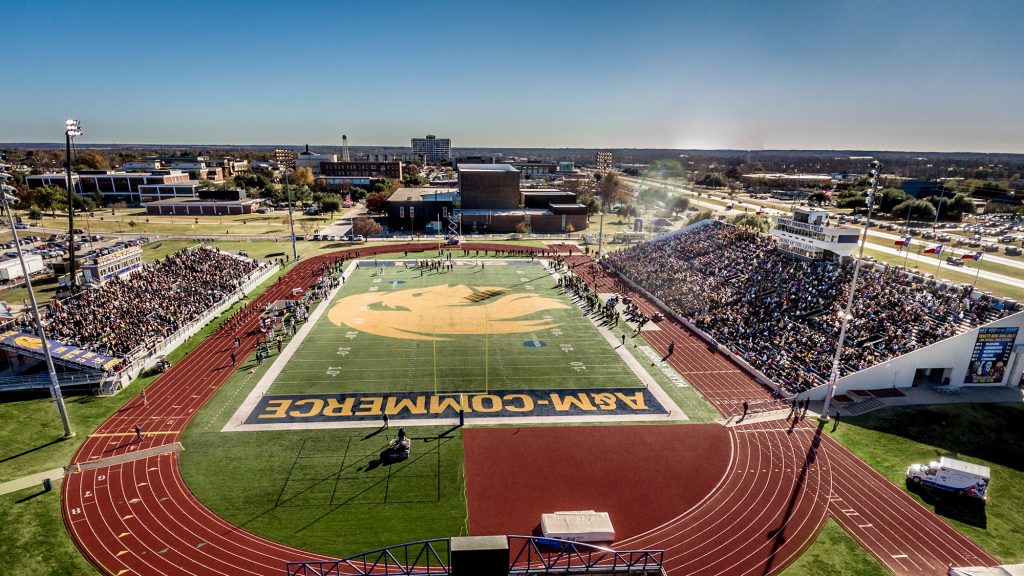 Texas A&M University-Commerce head football coach David Bailiff has announced the completion of his full-time coaching staff, as the Lions begin preparations for the 2019 season.

The offense will be led by offensive coordinator Billy Riebock, with Famika Anae coaching the offensive line. Wide receivers coach Yogi Gallegos and running backs coach Tim Bleil will return from the 2018 staff.

Joey Caldwell rounds out the staff, joining Lion Athletics as the senior director of sports performance.

“We had our first team meeting with the full staff on Sunday and it’s exciting,” Bailiff said. “The building had been mostly empty during the holidays and it’s exciting to hear the chatter of the young men. It’s a special time when they come back. They have high expectations, and we talked in that meeting about how quickly we have to trust each other to keep the momentum going.

“Our job here is not just to win football games, but also to help develop young men for when they graduate, so they are ready to go be productive members of society. This staff is going to be fabulous at helping these young men develop and grow. Winning’s part of it, but we need to give them all the tools they need to be total package young men.”

A LOOK AT THE STAFF

BAILIFF ON RIEBOCK
“Billy Riebock is an important hire for me after getting to work with him at Rice, because of the way he looks at the game and approaches it mentally. He was so involved in the game planning with us. He also has Division II and III experience, which I thought was important. I wanted to bring in some guys who are great football coaches and also understand the Division II model.”

Defensive coordinator Xavier Adibi was a defensive analyst at Arkansas in the 2018 season and previously worked as a scout and analyst on Baliff’s staff at Rice. Adibi was a college standout at Virginia Tech, earning first team AFCA All-American and first team All-ACC honors in 2007, after earning second team All-ACC honors in 2006. He was drafted by the Houston Texans in the fourth round of the 2008 NFL Draft and had a five-year NFL career, playing for Houston, Minnesota, Chicago, and Tennessee.

BAILIFF ON ADIBI
“I first met coach Adibi when he was playing with the Texans. He was a great college player and a great NFL player. He transitioned into pro scouting and when we hired him at Rice, he was initially looking at recruiting video and it was important to have a guy who’s been trained by the NFL to do that. I like the way he approaches the game with great preparation and his deep knowledge of the entire package. He played linebacker, and you have to have an understanding what’s going on up front as well as what’s going on in the coverage. He checked more boxes with his energy and the way he works with young men. I think he’s going to be a great fit here.”

Texas football legend and long-time collegiate coach Willie Mack Garza brings 18 years of coaching experience with him to the Lion staff. He was the defensive backs coach at Dixie State in 2017 after serving as the secondary coach at Lamar in 2016, and linebackers coach and special teams coordinator at Prairie View A&M in 2015.

Garza is a member of the Texas High School Hall of Fame after his stellar prep career at Refugio High School where he earned Parade All-American, All-State, and All-Decade (1980-1990) honors on the gridiron. He was a four-year starter at cornerback and safety at Texas, and was a Freshman All-American and the Southwest Conference Newcomer of the Year in 1988. The Longhorns went 10-2 and played in the Cotton Bowl in 1990.

BAILIFF ON GARZA
“Willie Mack is an iconic figure in the state of Texas if you’re involved with high school football. I knew who he was from his playing days at Texas long before we worked together at TCU. He’s one of the premier secondary coaches in the country and we are so fortunate to have Willie Mack here. He’s also been a defensive coordinator and been heavily involved in special teams, so he brings a wealth of experience knowledge to our staff.”

Jaylon Finner joins the Lion staff after serving as a graduate assistant at Ball State in 2018 and at Rice from 2016-18. He played defensive back for Rice from 2011-15 and helped the Owls win the 2013 Conference USA championship, marking the team’s first league title in 54 years. He played on three consecutive bowl teams (2012, 2013, 2014) under head coach David Bailiff.

BAILIFF ON FINNER
“I recruited Jaylon Finner out of high school and coached him for four years at Rice and he was part of our conference championship team. Upon graduation he went into high school coaching in Houston before I hired him back as a graduate assistant. He went to Ball State and now I’ve brought him home. The way he conducts himself on and off the field and the type of young man that he is makes him a great role model. He also has a great football mind and understanding of what we’re doing in the secondary.”

Famika Anae served as the tight ends coach at Dixie State in the 2018 season. Prior to DSU, Anae served three seasons as a graduate assistant at Virginia, where his father, Robert, currently serves as offensive coordinator. Anae played three seasons at BYU (2010-12) before his career was cut short due to injuries. Afterward, Anae stayed involved with the program as an undergraduate assistant and graduated from BYU in 2015.

BAILIFF ON ANAE
“Famika is one of those guys whose personality jumps out at you. He has a very high teaching vocabulary for the offensive line and we really noticed that in the interview process, as he answered every question we had in great detail in terms of both technique and fundamentals. He’s been raised in the game, and it always works when you’re a coach’s son that you have young man energy and gray hair knowledge.”

Casey Walker also brings experience from across multiple levels of football to the Lion staff. A member of the Super Bowl XLIX champion New England Patriots, Walker served at Oklahoma Baptist in 2018 as defensive line coach after a year of coaching at Garden City Community College and Central Oklahoma. The Garland native played for four years at Oklahoma prior to a four-year NFL career.

BAILIFF ON WALKER
“Coach Walker has an extensive playing background from playing at Oklahoma and for four years in the NFL. He is from Garland and moved to coaching in Division II after his playing career, and he will be a big help in recruiting California junior colleges and Texas high schools. I think our staff will identify with the high school coaches in Texas. You don’t have to look too far to find the great players in the Dallas area.”

Tim Bleil will serve as running backs and tight ends coach for the Lions for the fourth season. He has coached numerous all-LSC and All-American players in his time in Commerce.

BAILIFF ON BLEIL
“I’m so excited Tim Bleil stayed with our staff. I used to work with his uncle Fred and know his father, Bill – he’s another coach’s son. He did so much to keep us moving forward after I was hired. It’s important for a new coach to retain someone with institutional knowledge, so Tim’s been an integral part of keeping our operations going.”

Yogi Gallegos will enter his seventh season as a coach at A&M-Commerce, and has coached the explosive receiver group since the 2016 season. He has served as the Lions’ recruiting coordinator for the last few seasons and has been at Commerce since 2011, having played quarterback for two seasons before beginning his coaching career.

BAILIFF ON GALLEGOS
“Yogi’s kept this thing moving forward and when I was hired we had detailed and accurate recruiting information. It’s helped us stayed organized and get coaches into the schools to recruit quickly. We’re catching up from being a little behind when I was hired, and that’s thanks to Yogi’s efforts.”

Joey Caldwell was most recently the co-lead assistant strength and conditioning coach at Rice University. He began at Rice as an intern under Kevin Yoxall in 2014, and has also worked under Ryan Tedford. He also interned under Yoxall at Auburn from 2012-13 following a four-year playing career for the Tigers, where he was a linebacker on the 2010 BCS National Championship team.

BAILIFF ON CALDWELL
“Joey is an intense guy who knows how to win from his time playing football at Auburn. He’s incredible in the weight room, where he knows how to push the guys and get them to exceed what they think they can do. He’s also all about the student-athletes out of the weight room. He’s going to do everything he can as a sports performance coach, but he’s also a total package coach. They’ll see him all over campus supporting them.”