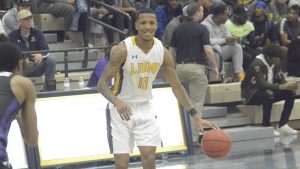 The Texas A&M University-Commerce men’s basketball team is ranked No. 20 in this week’s National Association of Basketball Coaches’ Division II Top 25 poll, moving up four spots from the previous ranking, as announced by the NABC Tuesday.

The Lions have an overall record of 13-2 with a 5-0 Lone Star Conference record, and have won eight consecutive contests, dating back to Thanksgiving weekend. This is A&M-Commerce’s second consecutive week in the polls after hovering just outside the top 15 since January 2018. Since joining Division II, this is the Lions’ 38th week in the national top 25.

A&M-Commerce is at the top of the Lone Star Conference standings as the only team remaining undefeated in league play. For the second straight game, the Lions will take on another ranked team, as they travel to Canyon on Thursday night to take on No. 20 West Texas A&M for a 7:30 p.m. tipoff. This is the fifth matchup between the two teams in the last calendar year, as the Lions and Buffs met four times last season.

The Lions will also take on unranked Eastern New Mexico on Saturday. Both games will be broadcast on the Lion Sports Network on KETR-FM 88.9 and KETR.org.