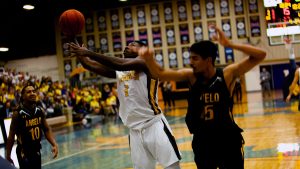 A&M-Commerce hosts battle of nationally ranked teams with No. 23 Tarleton on Thursday

KANSAS CITY, Mo. – The Texas A&M University-Commerce men’s basketball team is ranked No. 24 in this week’s National Association of Basketball Coaches’ Division II Top 25 poll, entering the rankings for the first time this season, as announced by the NABC Tuesday.

The Lions have an overall record of 12-2 with a 4-0 Lone Star Conference record, and have won seven consecutive contests, dating back to Thanksgiving weekend. This is A&M-Commerce’s first appearance in the rankings since January 30, 2018. Since joining Division II, this is the Lions’ 37th week in the national top 25.

A&M-Commerce is one of four teams to move from unranked into the top 25 this week, including this week’s only opponent – the Tarleton Texans – who are ranked No. 23, one spot above the Lions. Also ranked from the Lone Star Conference is West Texas A&M at No. 8 nationally. The trio of teams all sit on two losses entering play this week.

The A&M-Commerce vs. Tarleton matchup is set for 6 p.m. Thursday in the Field House.