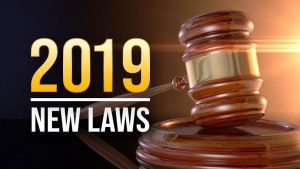 As we enter 2019, there are some laws that will change. Here’s a look at what’s in store.

The SB 2076 revises “the process for an owner or lienholder of a motor vehicle to obtain a certified copy of a lost or destroyed title.”

This means the Texas Department of Motor Vehicles can only issue you a certified copy of your car title, instead of the original, if you’re the first lienholder or the lienholder’s verified agent unless the owner has original proof from the lienholder.

Due to the population of Texas increasing, SB 1329 addresses more courts across the state will be added. It also revises the jurisdiction of some courts and judges, including allowing an associate judge to hear family lawsuits.

Some Texas courts also have jurisdiction over mental health matters. Some sections of the bill went into effect on Sept. 1, 2017, with more sections of the act becoming effective throughout the year.

HB 29 bill requires sexually oriented businesses to post a notice in their sink area of the restrooms with the number to the Naional Human Trafficking Resources Center. It also must be in English and Spanish and include any other information as ordered by the attorney general.

It also increases the penalties for certain prostitution offenses, cancels the part of the bill that disbands the Texas Human Trafficking Prevention Task Force and prioritizes hearings related to child sex trafficking cases.

The majority of the bill actually went into effect on Sept. 1, 2017, but a part pertaining to the Business and Commerce Code won’t kick in until March 1, 2019.

SB 463 won’t go into effect until Sept. 1, but states that school districts won’t be allowed to administer a Texas Assessment of Knowledge and Skills, or TAKS, test. The exam was replaced with end of course (EOC) exams in 2007. Also set to expire “districts and charter schools establish individual graduation committees for students who failed to pass one or two required EOC exams.”

HB 505 puts limits on the use of campaign funds by a former officeholder or candidate who became a registered lobbyist.

It says lobbyists can’t knowingly make or authorize a political contribution to other candidates or officeholders from the political contributions they received when they were in office. That part of the law applies during a two-year period that starts with the end date of their last term.

HB 501 will expand the financial activity a public officer or candidate must report in a personal financial statement filed with the Texas Ethics Commission.

They must report certain business associations if they own, acquired or sold 5 percent or more of a business and information on written contracts with government entities. Under certain conditions, they’ll be allowed to amend their personal financial statement.