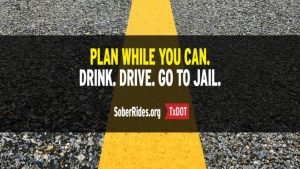 It was the middle of the night in 2006 when Debra Vasquez was awakened by the heart-wrenching phone call informing her that her 16-year-old daughter, Erica, and 5-year-old nephew, Elias, had been killed by a drunk driver. It was later revealed the drunk driver had two prior DWIs.

Vasquez is sharing her story to support the Texas Department of Transportation’s “Plan While You Can” campaign, which urges drivers to make a plan for a sober ride this holiday season.

“Planning for a sober ride to and from holiday festivities is not only smart and responsible, but it also could save your life and the lives of others,” said TxDOT Executive Director James Bass. “Let the holiday season be a time of celebration and fun, not regret. Nobody wants to remember the holidays as a time when they lost a loved one or killed an innocent person. These kinds of losses are totally preventable.”

In 2017, there were 2,469 alcohol-related crashes in Texas during the holiday season.* Those crashes killed 96 people and seriously injured another 202.

The “Plan While You Can” campaign includes a statewide tour featuring an interactive game called “Plan to Win.” In the game, three participants stand on an oversized game board as a live announcer presents a series of trivia questions related to the consequences of drinking and driving. Players avoid going to “jail” by correctly answering the questions. Spectators can view the questions and follow the game on a large monitor. The game is designed to be fun, yet educational, as it reminds audiences of the importance of planning for a sober ride rather than drinking and driving. The “Plan to Win” game will visit four Texas cities during December.

Drivers under the influence of alcohol not only risk killing or seriously injuring themselves or others, but also face up to $17,000 in fines and fees, jail time and loss of their driver’s license. As always, TxDOT urges drivers to visit SoberRides.org to find alternatives to drinking and driving, such as: