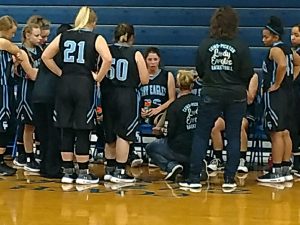 The Lady Eagles traveled to Bloomburg on Tuesday night and came out with a win 52-37.

Coach Brandi Crouch said, “We came out a little flat and not aggressive on the offensive end, but ended up finishing strong in our press the 4th quarter and by scoring 21 points in the 4th quarter. We haven’t been playing very consistent this year and that’s what I’ve been preaching to our kids. Consistency is going to be where our kids are going to succeed this year. It’s something that they haven’t been pushed to do in the past and it’s been a struggle to stress the importance of it. We play well in spurts, but have yet to put an entire 4 quarters together. If we play like we played in the 4th quarter, for a full game, it’s going to be hard to stop us. We have surprised a lot of teams this year already on our performance, but until we put a full game together, everyone really will not be able to see the potential this team has. They are buying into what I’m trying to teach them and it’s slowly paying off 1 game at a time.  I’m so proud of the progress these girls have made already and I am anxious to see the progress yet to come.”

K’lah Skidmore ended up with 23 total points, 15 being in the 4th quarter.
Lexi Busby had a phenomenal game with steals on defense and ended up with 12 points.
Faith Watkins was one of the top defenders and ended up with 2 points.
Jena Satterfield stepped up and played a great game defensively and added 4 points.
Kylie Osborne also was 5-6 from the free throw line and contributed to rebounding all night.
Kaylee Butler also added 2 points on the board.
“Our bench has also become a key role in progressing this year because they are very vocal and are also learning so much about the game. We are trying to build from the ground up and our bench may not be getting the playing time they want but they are learning so much about the game to hopefully get that playing time soon.”, said Coach Crouch.
The Lady Eagles will be traveling to Big Sandy for a tournament this weekend.