No. 15 Lions’ Fourth Quarter Comeback Falls Short In 34-28 Loss To No. 6 Tarleton In Regional Semis 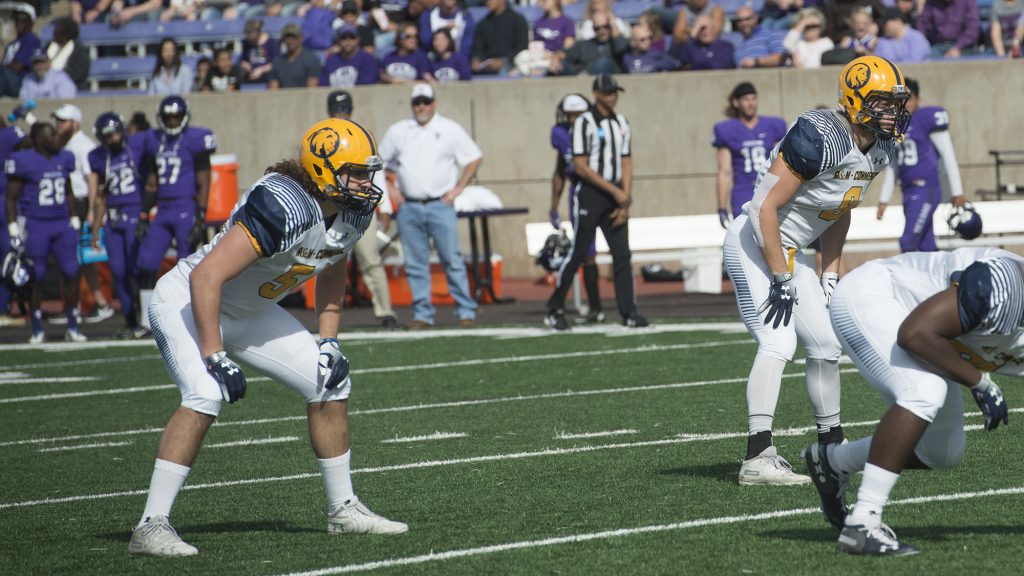 The No. 15 Texas A&M University-Commerce football team staged a fourth quarter comeback effort but ultimately fell to No. 6 Tarleton State University, 34-28, in the Regional Semifinal round of the NCAA Division II Playoffs on Saturday.

The Lions end their season at 10-3 after reaching the Regional Semifinal round for the third consecutive season. The Lion seniors completed their careers as the winningest class in school history with 43 wins in four seasons, and the Lions won 10 games for the third straight year. The Texans improve to 12-0 and advance to the Super Region Four final round.

INSIDE THE BOX SCORE
– Kristov Martinez (Edinburg) became the all-time leading kick scorer in NCAA Division II history, and set the NCAA Division II Playoff single game record with five field goals. Martinez went 5-of-5 with two 50-yarders, including a career-high 55-yarder in the third quarter. He finished his Lion career with 449 points and 75 career field goals – both school and Lone Star Conference records.
– Garrett Blubaugh (Keller) tied the single-game school record with 21 tackles in the game. He ties the record previously set by Antonio Wilson in 1999. Brucks Saathoff (San Antonio – Reagan) had 16 tackles in the game and forced a fumble.
– Kader Kohou (Euless – Trinity) and L.A. Dawson (Austin – LBJ) both had interceptions in the game.
– Kane Wilson (New Orleans, La) had 388 yards passing with a touchdown and an interception. He went 25-for-60 in the game and also recorded a rushing touchdown.
– Marquis Wimberly (Duarte, Calif.) led the team with 139 yards receiving on seven catches. Vincent Hobbs (Mesquite – Horn) added 89 yards on eight receptions while Ryan Stokes (St. Louis, Mo.) had 87 yards on five catches with an 18-yard touchdown.
– The Lions went 1-for-18 on third down and 3-for-3 on fourth down. TSU was penalized 16 times in the game for 112 yards. There were seven turnovers in the game.

HOW IT HAPPENED
First Quarter
After the Lions were forced to punt on their opening drive, the Lion defense came up big. Kohou stepped in front of a TSU receiver and picked off a pass, giving A&M-Commerce the ball in Texan territory. Aided by a defensive pass interference penalty and a long reception from Hobbs, the Lions drove into the red zone before their drive stalled. Martinez punched the ball through the uprights from 19 yards out to put the Lions up 3-0.

The teams traded punts twice each before TSU sustained its first drive of the game. A 46-yard rush from TSU quarterback Ben Holmes flipped the field position as TSU had its first drive in Lion territory. The quarter ended with the Texans driving into the red zone. The Lion defense held Tarleton scoreless in a quarter for the first time since September 22 – a span of 32 quarters.

Second Quarter
With the change of the quarter came a change in the direction of the field. Having had the wind blowing at their backs, the Texans now were going against the wind. The Lion defense forced fourth down and TSU went for it. The Lion defense stuffed the rush, holding TSU without points.

After a three-and-out from the Lion offense, TSU again drove into the red zone. The Lion defense held TSU out of the end zone, forcing a field goal attempt. The teams were tied at three with 11:40 to play in the half.

The defensive battle continued in the second quarter as both teams’ offenses could not sustain drives. Punts concluded four consecutive drives. TSU then caught a break as a punt dropped in front of the Lion returner but hit a Lion blocker and was covered by TSU.

The Lion defense again made a play. On a fourth down conversion attempt, Saathoff clogged the middle and stripped the Texan rusher of the ball and the ball was recovered by Kohou. The Lion defense could not convert a first down and were forced to punt again. However, TSU fumbled the punt return and the Lions recovered. The Texan defense forced the Lions backwards but Martinez converted the field goal from 38 yards out to give the Lions a 6-3 lead. This field goal gave Martinez the LSC scoring record and NCAA Division II kick scoring record.

The TSU rush attack finally broke through on their next drive, as a 47-yard rush put the Texans in scoring position. Three more rushes followed and TSU punched the ball into the end zone, taking their first lead of the game, 10-6.

After a Lion punt, TSU drove down the field again. After two rushes, the Texans found a wide-open receiver, who ran the ball 64 yards into the end zone. TSU took a 17-6 lead.

After a good return from Ramsey, Wilson completed consecutive passes to get the ball into range for Martinez, who pushed the ball through the uprights from 33 yards out to send the Lions into halftime trailing 17-9.

HALFTIME STATS
– The Lions were held to negative six yards rushing in the half, including four quarterback sacks. TSU had 212 rushing yards in the first half.
– Saathoff had 11 tackles in the first half, including three for loss.
– The Lion defense held TSU to 3-for-10 on third down and 0-for-2 on fourth down. The Lion offense was 0-for-9 on third down.

Third Quarter
After the teams traded punts on their first drives of the second half, the Lion defense again came up with a play. On an attempt down the right sideline, Dawson picked off a pass at midfield. The Lions got into range for Martinez, who hit a career long 53-yarder to cut the TSU lead to 17-12.

TSU hit two long pass plays in a row to drive the ball down the field. Two more rushes pushed the ball in and TSU increased their lead to 24-12.

Two TSU penalties and a completion to Hobbs brought the Lions across the 50 and Martinez again lined up for a long field goal attempt. This one was good from 55 yards, re-setting Martinez’ school record and bringing the score to 24-15 in favor of Tarleton.

After TSU drove down for a field goal inside the red zone, the Lions sustained a drive for the first time in the second half. Three long completions from Wilson took the Lions into the red zone. However, an errant pass was intercepted by TSU. The Texans held a 27-15 lead heading into the fourth quarter.

Fourth Quarter
TSU had a 43-yard touchdown rush early in the fourth quarter to push their lead to 34-15.

The Lion offense then began to find its rhythm. Wilson hit multiple throws, including a 34 yard completion to Wimberly. Close to the goal line, Wilson rushed the ball in from three yards out. The Lions failed to convert the two-point conversion and trailed 34-21 with 8:55 to play.

The Lion defense forced a punt on TSU’s next drive and the Lion offense again went driving. Wilson hit Hobbs for a 17-yard gain and then found Stokes for a 42-yard completion. Wilson then found Stokes again for an 18-yard touchdown to cut the TSU lead to 34-28 with 5:37 left on the clock.

The Lion defense forced a three and out, stopping three runs short of the first down marker to give the Lions an opportunity to win the game on offense. On the first throw of the drive, Wilson hit Wimberly for an over-the-shoulder grab for 34 yards. Wilson then hit Hobbs for another big gain. Inside the 30, Wilson took another snap but was forced out of the pocket and was stripped of the ball. TSU rushed three times and this time picked up just enough for the first down and ran out the clock.

Lights of Life Hosting Luminary and Tree Lighting on Thursday