Home Local News No. 15 Lions Look To Avenge Loss With Rematch At No. 6 Tarleton In Regional Semifinal
Local NewsUncategorized

No. 15 Lions Look To Avenge Loss With Rematch At No. 6 Tarleton In Regional Semifinal 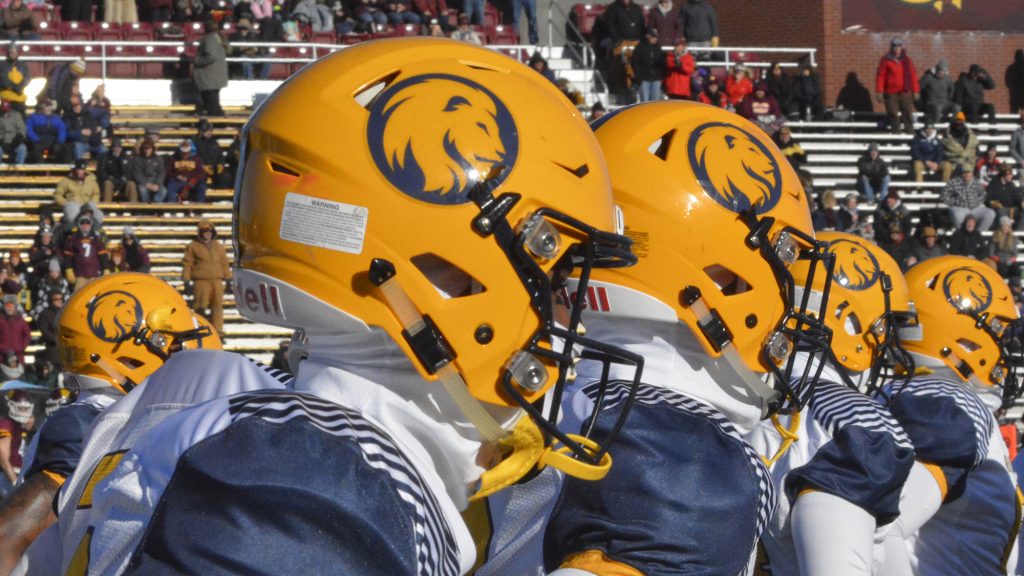 The No. 15 Texas A&M University-Commerce football team is in its third consecutive NCAA Division II Regional Semifinal and face a rematch from the regular season, traveling to Stephenville to take on Lone Star Conference rival No. 6 Tarleton on Thanksgiving weekend.

WE’RE GOING STREAKING!
• With their qualification for their fourth straight NCAA Division II Playoff berth, the Lions have the third-longest active playoff streak in the nation.
• Only Northwest Missouri State (15 straight) and Ferris State (five straight) have longer active playoff streaks than A&M-Commerce.
• In Lone Star Conference history, only A&M-Kingsville (1992-98, 7 straight) has a streak of more than four appearances.
• The Lions have also advanced to the regional semifinal round for the third consecutive season. Ferris State has reached the regional semifinal four times in a row.
• Don Carthel‘s West Texas A&M teams qualified four straight times from 2005-08.
• This is the Lions’ seventh all-time NCAA Playoff berth, with an 9-5 record.
• Today’s game also marks the Lions’ 25th all-time postseason contest, with A&M-Commerce carrying a record of 16-7-1.

ALL-TIME AGAINST THE TEXANS
• The Lions are 15-12 all-time in the trophy game, with a 8-5 record in Stephenville.
• The Lions had won six matchups against the Texans in a row prior to Tarleton’s 47-21 win in Commerce in October.
• A&M-Commerce has not lost in Stephenville since 2011, marking a three-game win streak in Erath County.
• This is Lion Athletics’ third straight weekend of playoff action in Stephenville, as the volleyball team won the Lone Star Conference Tournament, then advanced to the NCAA Division II South Central Regional final.
• Also of note, the Lion Volleyball team as many matches in Stephenville this season as the did in Commerce, playing 11 matches in both locales.

MOVING UP THE RANKS
• Head coach Colby Carthel now ranks fifth in A&M-Commerce history in coaching wins with 59 wins.
• He is now only four wins behind Lion and LSC legend J.V. Sikes, who sits in fourth place with 63 wins.
• He was named the Lone Star Conference Coach of the Year in the postseason awards.

SENIORS SET SCHOOL RECORD
• The 2018 senior class has now claimed sole possession of the school record for wins in a four-year period with 43 games won in a four year span.

CONTINUED RECOGNITION NATIONALLY
• A&M-Commerce has been ranked in 51 consecutive AFCA polls, dating back to the 2015 preseason poll.
• This is A&M-Commerce’s 57th all-time appearance in the AFCA poll since its inception in 2000.
• In the polls recognized by Division II as the top rating system, the Lions have been recognized as a nationally ranked team 106 times since joining Division II in 1981.

KICKIN’ IT WITH KRISTOV
• Kicker Kristov Martinez scored nine kicking points with two field goals and three PATs in the win over Angelo State.
• He was named the 2018 Lone Star Conference Academic Player of the Year, as well as first team all-LSC.
• The graduate student from Edinburg is now 16-for-21 on field goal attempts and 47-for-47 on PAT attempts in 2018.
• He is the Division II active career leader in field goals (70), which ranks second in Division II history. He has made 13 consecutive field goals in the postseason.
• He is the Division II active career leader in PATs (223), which is the third most in all divisions.
• Has made 102 consecutive PATs, dating to the third week of the 2017 season.
• He is the Division II active career leader in points (433), and needs five points in second round of playoffs to become Division II’s all-time career kick scorer.
• A&M-Commerce leads Division II in kickoff return coverage, allowing only 10.86 yards per return on 35 returns, while also booting 27 touchbacks. Lions have led nation in kickoff return coverage in each of the last two seasons, and placed second the year prior.
• In terms of overall scoring, Martinez (433 points) is chasing West Texas A&M’s Sergio Castillo (437 points), and has passed former Harlon Hill winner at Texas A&I Johnny Bailey (426 points) for the all-time LSC scoring record.

HARRIS AWARD NOMINEE IS TOP TACKLER
• The Lions’ leading tackler in senior Brucks Saathoff is also one of the leaders in the Lone Star Conference.
• He was named first team all-LSC for the second consecutive season
• The San Antonio native is averaging 7.3 tackles per game through 11 contests, ranking 162nd nationally and 13th in the LSC.
• For his career, Saathoff has 296 tackles, which is the leading mark for the Lions.
• This ranks Saathoff in the top five in Lion history in tackles.

WIMBERLY EARNS FIRST TEAM HONORS
• Lion wide receiver Marquis Wimberly earned first team all-Lone Star Conference honors.
• He earned the honor after catching 50 passes for 674 yards and seven touchdowns in 10 games of the regular season of his senior campaign.
• He ranked sixth in the league in receiving yardage and third in receiving touchdowns.
• Wimberly added three receptions for 49 yards in the Minnesota Duluth game, including a key 40-yard touchdown reception in the early part of the third quarter.

SIMON IMPRESSES WITH FIRST TEAM LAURELS
• Lion tackle Amon Simon earned first team all-Lone Star Conference honors.
• Simon earns all-LSC honors for the first time in his career.
• He started in every game for the Lions as a redshirt sophomore, establishing himself as one of the league’s top young talents and most dominant linemen.

BIG MIKE REPEATS
• Lion defensive end Michael Onuoha earned first team all-Lone Star Conference honors.
• Onuoha earns first team all-LSC honors for the second consecutive season.
• In his senior campaign, he has made 42 tackles with 14.0 tackles for loss, 6.5 sacks, an interception with a 48-yard return, and two blocked kicks.
• He ranks fourth in the LSC in sacks and fifth in the LSC in tackles for loss.

TAKE THAT AND LIKE IT
• The Lion kicking game has been spectacular during the 2018 season.
• A&M-Commerce ranks first nationally in kickoff return defense, as Lion opponents average 10.86 yards per return.
• A&M-Commerce ranks No. 34 nationally in net punting. The Lions average 36.23 yards net per punt.
• Tristan Perry averages 39.3 yards per punt, which is fourth in the Lone Star Conference and ranks 60th nationally.

RETURN TO SENDER
• Lion defensive back Dominique Ramsey earned first team all-Lone Star Conference honors at safety, then put forth another impressive performance in the regional quarterfinal.
• The all-LSC honor is Ramsey’s first postseason honor.
• In the Minnesota Duluth game, the redshirt sophomore returned a punt 79 yards for a touchdown, breaking eight tackles in the process for his secont punt return touchdown and fourth overall return touchdown of the season.
• In the regular season finale, he had a 99-yard interception return for a touchdown in the third quarter of the win over Angelo State.
• Ramsey has three interceptions for 226 return yards, averaging 75.3 yards per INT return. This does not include an interception on a two-point conversion attempt in the A&M-Kingsville game, which the NCAA statistics policy does not count as an interception.
• Ramsey’s interception return yardage leads the nation.
• The Lions as a team average 42.7 yards per interception return on nine picks.
• Of the 10 interceptions, four have been returned for touchdowns.
• On top of this, Ramsey ranks 17th nationally and first in the LSC in punt return average, averaging 12.8 yards per punt return.
• He has nine plays of over 20 yards this season – five punt returns, three interception returns, and a kickoff return. Four of those plays went for touchdowns.
• His six career interceptions is the most on the team.

NICE NIGHT TO BREAK A RECORD
• The Lions held UT Permian Basin to minus-69 rushing yards last week to establish a program single-game record for rush defense.
• The previous record of minus-48 yards was set against Angelo State in 1992.
• The Lone Star Conference record of minus-77 yards was set by McMurry against Abilene Christian in 1968.
• A&M-Commerce had nine sacks and held UTPB running backs to zero cumulative rushing yards. The Falcons did not have a rushing first down.
• This is the second-fewest rushing yards allowed in a Division II game in the last six seasons. Limestone allowed minus-79 rushing yards against Shaw in 2016.
• In all four divisions of NCAA football this season, the Lions have the best single game rushing defense performance.

KINCADE HOUSE CALLS RESULT IN CONFERENCE HONORS
• Lion return specialist Reggie Kincade earned first team all-Lone Star Conference honors.
• Kincade established himself as one of the top return threats in the nation and earns his first all-conference honor.
• He ranks first in the LSC and second nationally in kickoff return average at 38.7 yards per return during the regular season.
• He has two kickoff returns for touchdowns this season.
• He was also previously a track All-American on the Lions’ outdoor 4×100-meter relay team.

ON THE ROAD AGAIN
• This is not just a Willie Nelson reference for coach Carthel, even though he will appreciate it.
• The 2018 Lions are 6-0 on the road.
• The 2018 season is the eighth time in program history that the Lions have won five or more true road games, including an 8-1 record away from Commerce in the 2017 National Championship season and a six-win road season in 2016.
• The Lions also had six road wins in 1951, 1953, and 1980. The Lions had five road wins in 1957 and 1990. Each of those seasons with the exception of 1951 concluded with a postseason appearance.

REPEAT PERFORMANCE
• The Lions have seen the same opponent twice in the same season four times total.
• The most recent was the two years of the Lone Star Conference Playoff in 2014 and 2015, going 2-2 in those games.
• The Lions won each LSC Semifinal, beating Tarleton 56-49 in the 2014 semifinal.
• Prior to that, there were two World Wars between occasions in which the Lions saw the same team twice.
• In the first season of ET football in 1914, the Lions won two games against Commerce High School.
• In year two of Lion football in 1915, ET split the only two games of the season’s schedule with the now-defunct Burleson College of Greenville.
• In those two seasons, the point after touchdown had not been introduced to college football, as that would be instigated in 1922.

LIONS ALL-TIME IN THE POSTSEASON

FREE FOOTBALL
• The Lions are 5-3 in overtime games all-time.

November 24 in ET/TAMUC Football History (3-2) :
• 1928 – East Texas drops the season finale at McMurry, 42-13.
• 1951 – The Lions make the short trip to Sherman and take down Austin College, 12-7.
• 1955 – ET picks up a win in Alpine in the season finale, shutting out Sul Ross, 14-0.
• 1956 – The Lions end the campaign with a 45-6 rout of Sul Ross at home.
• 1990 – In their first NCAA Division II Playoff appearance, ET advances to the National Quarterfinal, falling to Pittsburg State, 60-28, at Carnie Smith Stadium in Kansas. Gary Compton recovered a Jarrod Evans fumble for the Lions’ first touchdown before the Gorillas rattled off 32 straight points. Compton caught a 20-yard pass, but ET trailed 39-14 at half. Compton and Owens scored in the third quarter to cut the lead to 11 points before PSU scored 21 in the fourth to close the game. The Lions had forced a record number of turnovers prior to the game, but then turned the ball over eight times to Pitt State, and forced only one.