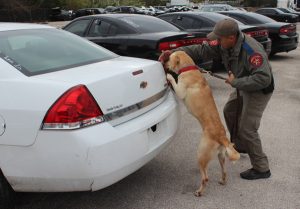 “The department’s expertly-trained canine teams play an essential role in detecting and deterring drug trafficking and other criminal activity,” said DPS Director Steven McCraw. “The canine teams joining our ranks will be a tremendous asset, and we are confident that their specialized skills will help make Texas a safer place.”

The breeds include two Labrador Retrievers, two Belgian Malinois and one Dutch Shepherd. Four of the newly-trained canines will be used for drug detection, and one will be used for explosive detection. One of the dogs was obtained from the U.S. Department of Homeland Security.

In the first nine months of 2018, DPS canine teams assisted in the seizure of approximately 5,100 pounds of marijuana, 203 pounds of cocaine, 85 pounds of heroin, 103 pounds of methamphetamine, 436 pounds of hashish and $4 million in cash.

For b-roll of today’s event, visit the DPS YouTube Channel.