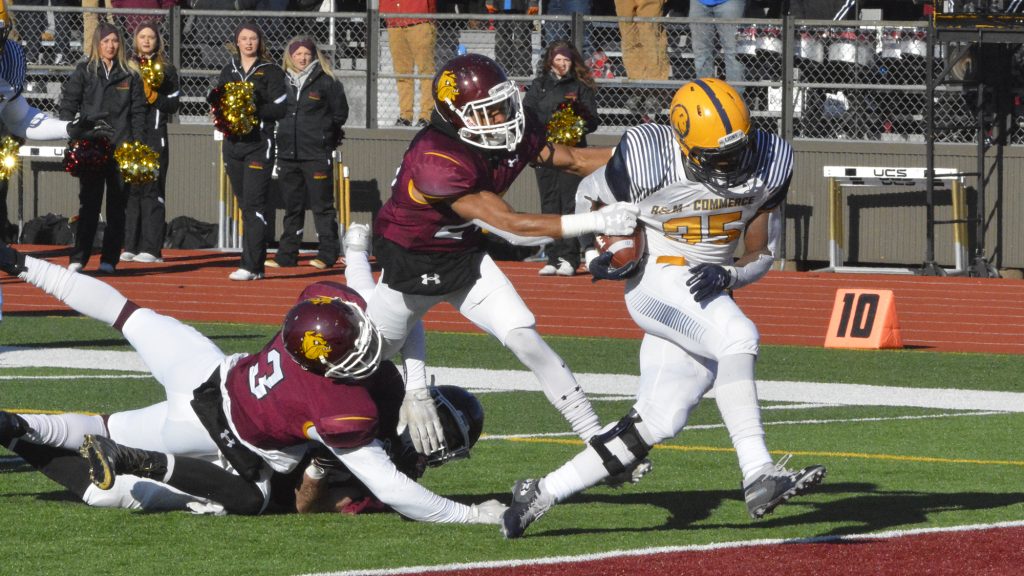 A stout defensive performance and special teams fireworks led the Texas A&M University-Commerce football team to a 33-17 win over the University of Minnesota Duluth in the regional quarterfinal round of the NCAA Division II Playoffs on Saturday at Malosky Stadium.

The Lions move on to the regional semifinal round with the win and run their overall record to 10-2 as the sixth seed in Super Region Four. Second-seeded UMD ends its season at 11-1.

A&M-Commerce will take on Lone Star Conference rival and second-seeded Tarleton in the regional semifinals on Saturday, November 24, in Stephenville.

INSIDE THE BOX SCORE
– The win is the Lions’ sixth consecutive playoff victory.
– The Lions advance to the regional semifinal round for the third consecutive season.
– A&M-Commerce’s defense limited the Bulldogs to 188 total yards and 13 first downs in the game. The Bulldog offense only scored three points. This is the second consecutive regional quarterfinal in which the Lions did not allow an offensive touchdown. UMD entered the game averaging 470.4 yards of offense.
– Garrett Blubaugh (Keller) led the Lions with 10 tackles, 2.0 sacks, and 2.5 tackles for loss. Deionte Haywood (Costa Mesa, Calif.) had eight tackles, 2.0 tackles for loss, 1.5 sacks, and a forced fumble which was recovered by Brandon Bascue (Flower Mound).
– Chris Smith (Mansfield – Legacy) and Felipe Chambers (Fair Oaks, Calif.) each blocked punts.
– The Lions scored two touchdowns on UMD punts. Dominique Ramsey (Converse – Judson) returned a punt 79 yards for a touchdown just before halftime, and Dayne Douglass (Canyon) returned a blocked punt 20 yards for a score in the fourth.
– The TAMUC defense sacked Bulldog quarterbacks five times, while the Lion offense allowed none.
– Ovie Urevbu (Plano – Legacy Christian) was the Lions’ leading rusher, carrying the ball 27 times for 65 yards and a 15-yard touchdown in the first quarter. The touchdown was the first time the Bulldogs allowed a touchdown in the first quarter this season.
– Kane Wilson (New Orleans, La.) completed 14-of-31 passes for 213 yards and a touchdown. His two interceptions were returned for scores by the Bulldogs.
– Ryan Stokes (St. Louis, Mo.) had five receptions for 100 yards, and Marquis Wimberly (Duarte, Calif.) had three catches for 49 yards, including a 40-yard touchdown in the third quarter.
– Kristov Martinez (Edinburg) made field goals of 25 and 43 yards. Along with 3-for-3 on PAT kickss, Martinez scored nine points and moves his career scoring total to 433 points. He needs five points in the regional semifinal to become the Lone Star Conference’s all-time leading scorer. He has made 70 career field goals, becoming the second player in Division II history to hit that mark. He has also made 102 consecutive PATs.

HOW IT HAPPENED
The Lion defense started off hot, sacking the UMD quarterback on the game’s second play and forcing a 12-yard punt. The short field led to the opening score, as Urevbu scampered to the end zone from 15 yards out to give A&M-Commerce a 7-0 lead with 10:39 left in the first quarter.

On the Lions’ next drive, the blue and gold drove to the UMD 23 and had a chance at a field goal, but a poor snap gave the ball back to the Bulldogs. A touchdown pass was wiped off the board after an offensive pass interference penalty.

After a three-and-out, Smith blocked the Bulldog punt and the Lions started near midfield. A 38-yard pass from Wilson to Stokes got the Lions to the redzone, but A&M-Commerce would have to settle for a 25-yard Martinez field goal. The kick gave the Lions a 10-0 edge with 2:02 left in the first quarter.

The Lion defense kept the momentum rolling into the second quarter, as they snuffed out a fake punt attempt. A&M-Commerce was driving downfield when the Bulldogs made their first big play. Gus Wedig snagged a Wilson screen pass and returned it 80 yards for a UMD score, making it 10-7 with 12:15 left in the half.

The teams traded punts, then Minnesota Duluth’s defense struck again, as Nate Pearson intercepted a pass and returned it 29 yards for a score. The scoreline flipped to 14-10 in the Bulldogs’ favor with 8:01 left in the half.

A&M-Commerce extended its lead to two scores on the opening drive of the second half. Wilson went over the top to Wimberly for a 40-yard score on the sixth play of the drive to make it 24-14 with 12:23 left in the quarter.

After the sides traded punts for the rest of the third quarter, UMD scored its only offensive points of the day in the early stages of the fourth quarter. Dan Branger hit a 32-yard field goal to cut the lead to 24-17 with 12:56 left in the game.

On the Bulldogs’ next drive, sacks by DD Fletcher (Arlington – Martin) and Blubaugh set up a fourth down. Chambers blocked the punt and Douglass scooped it up at the 20, then returned the ball to the end zone to push the Lion lead to 30-17 with 7:05 remaining.

Mark Westbrook (Schertz – Clemens) intercepted a pass in Bulldog territory, setting up Martinez’ 43-yard field goal and making it a 33-17 game with 4:20 to play.

The Bulldogs were within two scores on each of their final two drives, but Haywood’s strip sack and a fourth down stop by Westbrook kept the Bulldogs off the board and gave the Lions their sixth straight playoff win.

DPS Encourages Motorists to Use Stranded Motorist Hotline if Vehicles Break Down.