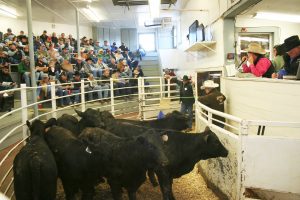 The cattle industry in Northeast Texas celebrated a milestone at the Sulphur Springs Livestock Commission Wednesday when the Northeast Texas Beef Improvement Organization (NETBIO) observed its 20th year of operation with a big barbecue luncheon, a board of director’s meeting and a pre-conditioned calf and yearling sale.

The organization was launchedin 1998 by a group of cattle producers and agribusiness leaders for the purpose of enhancing the beef industry in Northeast Texas.NETBIO is recognized as a leader in its reputable offering of pre-conditioned calves.

The anniversary celebrationWednesday kicked off with a barbecue meal that was enjoyed by over 450 producers, buyers, family and friends. Following the lunch and prior to the sale, the annual NETBIO membership meeting was held. At the meeting the board of directors approved the financial report and elected nominees to fill six vacancies on the producer and agribusiness board.

Elected to the agribusiness board of directors were three current members who were re-electedfor another term. All from Sulphur Springs, they include David Black, DVM; Hopkins County Extension Agent Mario A. Villarino, DVM, PH.D., and Chris McClure, vice president of Operations for BeefTek, a livestock technology company.

Following the membership meeting, Marcus Hill, a native of Sulphur Springs and current president and chairman of AgWorkers Insurance, spoke to the crowd gathered in the market center auditorium. Hill congratulated the members on the NETBIO program and encouraged them to continue their outstanding work to improve and promote the cattle industry in the region.

After the meeting, auctioneer Joe Don Pogue gaveled into action the sale of 6,378 head of pre-conditioned cattle that were consigned by 225 producers.

The cattle were purchased by 35 buyers at an average of $750.08 per head. Several hundred head were sold over the Internet.

The next NETBIO pre-conditioned cattle sale will be held on Wednesday, January 16. The deadline for weaning calves for that sale is Dec. 2, and the booster shot deadline is Dec. 17. To consign calves and get ear tags for the sale, call 903-885-2455.