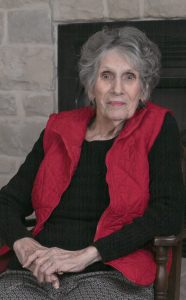 She was preceded in death by her parents, husband, and nine brothers and sisters.

Memorials can be made to First Baptist Church.