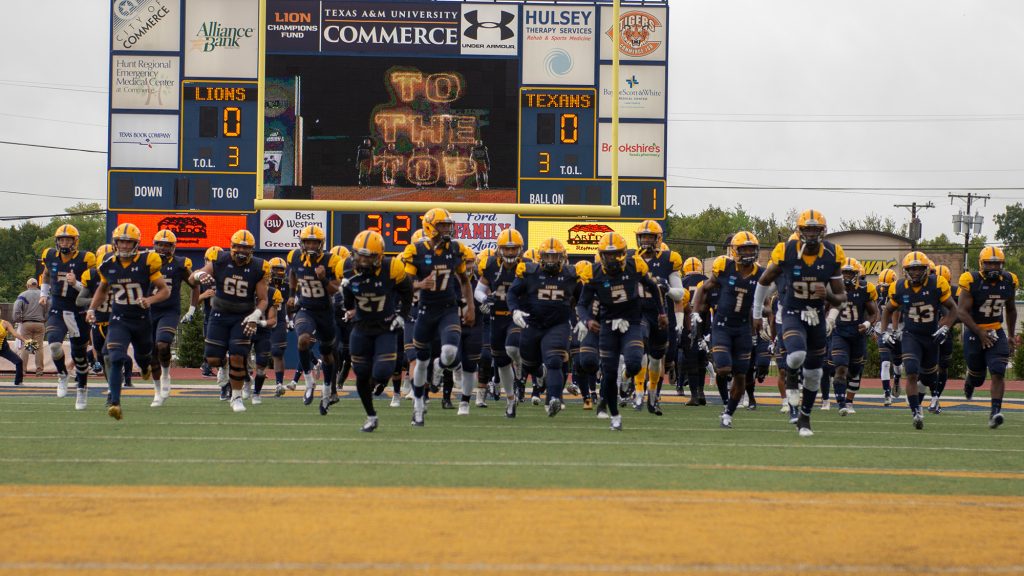 The No. 14 Texas A&M University-Commerce football team closes out the regular season by welcoming Angelo State for Senior Day and Military Appreciation Day this Saturday.

LIONS HOST ANGELO FOR SENIOR DAY
• The Lions have five straight campaigns with eight victories and are looking for a third straight with nine wins, which would match a school record.
• Prior to the tenure of Colby Carthel, the Lions had never had a run of more than three straight seasons with eight wins.
• The Lions have aspirations for fourth straight NCAA Division II Playoff berth.

ALL-TIME AGAINST THE RAMS
• The Lions and Rams are meeting for the 50th time in the history of the two programs.
• ASU leads the all-time series 29-18-2.
• A&M-Commerce has an advantage at home, with a 14-12-1 record against the Rams.
• The Lions have won four consecutive games against Angelo State. A&M-Commerce has won five of the last six meetings.
• The Lions’ 41-40 win in San Angelo in 2014 snapped a fiv- game Ram win streak.
• The Lions are currently enjoying their longest streak over ASU in the history of the series.

CONTINUED RECOGNITION NATIONALLY
• A&M-Commerce has been ranked in 50 consecutive AFCA polls, dating back to the 2015 preseason poll.
• This is A&M-Commerce’s 56th all-time appearance in the AFCA poll since its inception in 2000.
• In the polls recognized by Division II as the top rating system, the Lions have been recognized as a nationally ranked team 105 times since joining Division II in 1981.

MOVING UP THE RANKS
• Head coach Colby Carthel now ranks fifth in A&M-Commerce history in coaching wins with 57 wins.
• He is now only six wins behind Lion and LSC legend J.V. Sikes, who sits in fourth place with 63 wins.

SENIORS ON PACE TO SET SCHOOL RECORD
• The 2017 senior class established the school record for wins in a four-year period with the victory in the National Championship Game with 42 games won in a four year span.
• The 2018 seniors now rank second in school history at 41-9 with a guarantee of one more game in the season.

MARTINEZ CONTINUES TO CLIMB SCORING CHARTS
• Kicker Kristov Martinez scored eight kicking points with two field goals and two PATs in the win over UT Permian Basin.
• The graduate student from Edinburg is now 12-for-17 on field goal attempts and 39-for-39 on PAT attempts in 2018,
• He is now 66-of-88 on field goal attempts in his career, which is tied for fourth in Division II history.
• The Division II career record is 82 made field goals. Second place is 68.
• Martinez is now the record-holder for most career field goals in Lone Star Conference history, eclipsing Sergio Castillo’s 62 career field goals.
• Martinez is the Division II active career leader in made field goals, and fourth in all NCAA divisions behind LSU’s Cole Tracy  (89), Toledo’s Jameson Vest (69), and Wisconsin’s Rafael Gaglianone (67).
• Martinez is on the preseason, September, and October watch lists for the Mitchell Award.
• For his career, Martinez has made 215-of-222 PAT attempts and is the Division II active career leader. Oklahoma’s Austin Seibert is the all divisions active career leader with 281 made PATs. Martinez is fourth in all divisions behind Seibert, North Dakota State’s Cam Pederson (225), and Ohio State’s Sean Nuernberger (216).
• In terms of overall scoring, Martinez (413 points) is chasing Castillo (437 points), and former Harlon Hill winner at Texas A&I Johnny Bailey (426 points) for the all-time LSC scoring record.
• Martinez is also the only Division II kicker with 60 or more consecutive PATs made, having made 94 straight PATs.

HARRIS AWARD NOMINEE IS TOP TACKLER
• The Lions’ leading tackler in senior Brucks Saathoff is also one of the leaders in the Lone Star Conference.
• The San Antonio native is averaging 8.2 tackles per game through nine contests, ranking 86th nationally and sixth in the LSC.
• For his career, Saathoff has 291 tackles, which is the leading mark for the Lions.
• This ranks Saathoff in the top five in Lion history in tackles.

UREVBU HITS CAREER HIGH FOR SECOND STRAIGHT WEEK
• Lion running back Ovie Urevbu had his sixth career 100-yard rushing game and a career high against UT Permian Basin.
• He had 27 carries for 195 yards in the win.
• This total pushed the senior from Plano over 1,000 career rushing yards
• Urevbu now has 1,294 career yards on 200 carries, averaging 6.5 yards per carry for his career.

TAKE THAT AND LIKE IT
• The Lion kicking game has been spectacular during the 2018 season.
• A&M-Commerce ranks first nationally in kickoff return defense, as Lion opponents average 10.83 yards per return.
• A&M-Commerce ranks No. 24 nationally in net punting. The Lions average 36.93 yards net per punt.
• Tristan Perry averages 41.2 yards per punt, which is second in the Lone Star Conference and ranks 31st nationally.

RETURN TO SENDER
• Lion defensive back Dominique Ramsey had a key 84-yard interception return for a touchdown in the fourth quarter of the Homecoming win over WT to seal the victory.
• Ramsey has two interceptions for 127 return yards, averaging 63.5 yards per INT return. This does not include an interception on a two-point conversion attempt in the A&M-Kingsville game, which the NCAA statistics policy does not count as an interception.
• On top of this, Ramsey ranks 22nd nationally and second in the LSC in punt return average, averaging 11.6 yards per punt return.
• He has six plays of over 20 yards this season – three punt returns, two interception returns, and a kickoff return. Two of those plays went for touchdowns.
• His five career interceptions are tied for the team lead with senior Chris Smith.

LIONS RANKED SIXTH IN REGIONAL RANKING
• The regional rankings came out for the third time on Monday, with the Lions ranked sixth in Super Region Four.
• The top seven teams in the region qualify for the playoffs at the end of the regular season, with the field announced on November 11.
• The selection show will be posted on NCAA.com at 4 p.m. Sunday/
• The Lions have been ranked in every regional ranking in the last five seasons.
• In the current configuration of Super Region Four (Lone Star, RMAC, Northern Sun, GNAC), the Lions were ranked seventh in the initial rankings in week one of 2018.
• This is the second season of the current configuration of the region.

NICE NIGHT TO BREAK A RECORD
• The Lions held UT Permian Basin to minus-69 rushing yards last week to establish a program single-game record for rush defense.
• The previous record of minus-48 yards was set against Angelo State in 1992.
• The Lone Star Conference record of minus-77 yards was set by McMurry against Abilene Christian in 1968.
• A&M-Commerce had nine sacks and held UTPB running backs to zero cumulative rushing yards. The Falcons did not have a rushing first down.
• This is the second-fewest rushing yards allowed in a Division II game in the last six seasons. Limestone allowed minus-79 rushing yards against Shaw in 2016.
• In all four divisions of NCAA football this season, the Lions have the best single game rushing defense performance.

SS, Saltillo each climb in weekly rankings up