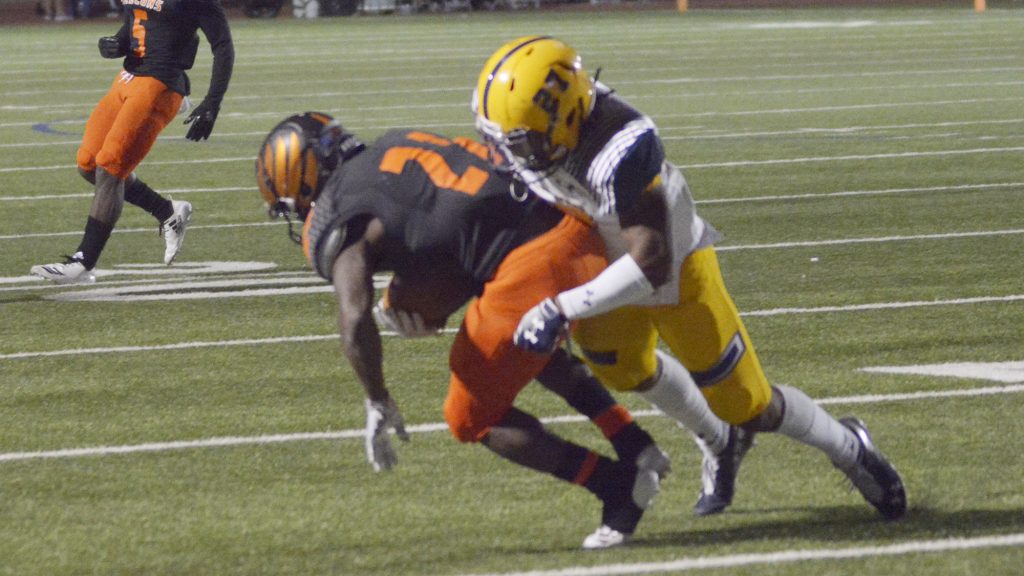 The No. 16 Texas A&M University-Commerce football team defeated UT Permian Basin 20-17 on Saturday. The Lions trailed coming out of halftime but shutout the Falcons in the second half to get the win.

The Lions conclude the regular season next Saturday with a home game against Angelo State. The game will be played at 4 p.m. at Ernest Hawkins Field at Memorial Stadium.

INSIDE THE BOX SCORE
– The Lion defense forced nine sacks in the game. Pierre Leonardhad three sacks, a career high. Deionte Haywood had 1.5 sacks. Josh Reynolds, Dayne Douglass, DD Fletcher, Michael Onuoha and Elijah Earls also had sacks.
– The Lion defense had 14 tackles for loss. A&M-Commerce held UTPB to just 23 yards of offense in the second half.
– The Lion defense held UTPB to -69 rushing yards. Three Falcon runners were held to negative yardage.
– The Lion rushing attack was led by Ovie Urevbu, who rushed for a career-high 195 yards. He averaged 7.2 yards per carry. Carandal Halehad 38 yards rushing and a touchdown run in the first quarter.
– Kristov Martinez made two field goals and two extra points. Reggie Kincade had a long kickoff return of 53 yards, averaging 30.7 yards per return.
– Kane Wilson completed 19-of-29 passes for 205 yards. He also rushed for the go-ahead touchdown in the fourth quarter.
– Kelan Smith had 93 yards receiving on eight receptions while Vincent Hobbs had 41 on four grabs.
– The Lions fumbled four times in the game, losing two early in the second half.

HOW IT HAPPENED
The teams traded punts to begin the game before the Lions got a drive going. Urevbu began the drive with a 25-yard rush. After another first down, the Lions were forced to attempt a field goal. Martinez drilled the kick from 26 yards and the Lions took a 3-0 lead.

The Falcons then took the ball and drove the length of the field, including a 47-yard completion. The next play was an 11-yard touchdown pass. UTPB took a 7-3 lead.

The Lions responded with a touchdown drive of their own. Utilizing the ground-and-pound approach, Urevbu had multiple long rushes before Hale took the ball from the 15-yard line and rushed right up the wide-open hole for a touchdown. The Lions regained a 10-7 lead.

Both teams had sacks end their next drives and the Falcons again were forced to punt. Wilson hit a 32-yard pass to Smith and another long gain to Vincent Hobbs. The drive stalled just outside the red zone and Martinez was unable to hit the 28-yard field goal. The Lions held onto their 10-7 lead.

The teams traded punts again before the Falcons drove downfield once again. The UTPB quarterback had three long pass plays, including a 15-yard touchdown. The Falcons took a 14-10 lead.

The Lions had a chance after a 53 yard kickoff return from Kincade and took advantage. Martinez was called upon and this time made a 37-yarder to bring the Lions within one.

The Lion defense again forced a three-and-out, including a sack from Onuoha. The Lions were in business after a long rush from Urevbu. But with the next rush from Hale, the Falcons forced a fumble inside the red zone. The Lion defense again held to force a punt. This time the Lions stalled in the red zone. A bad snap on the field goal attempt resulted in another loss of the football.

On the next play, Martinez blasted the kickoff low and straight, hitting it off a UTPB player. The Lions recovered the fumble and had the ball at midfield. The drive could not get started and the Lions punted the ball.

The Lion defense continued to hold strong, forcing two more Falcon punts. The Lions then drove into Falcon territory again but failed to convert another fourth down, giving the ball back to the Falcons.