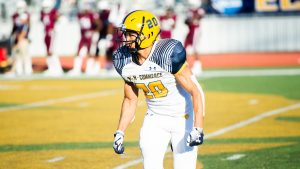 The No. 18 Texas A&M University-Commerce football team prevailed in all three phases of the game on the way to a 41-16 Homecoming win over West Texas A&M at Ernest Hawkins Field at Memorial Stadium on Saturday night.

With the victory, the Lions are now 7-2 overall and 5-1 in the Lone Star Conference, while the Buffaloes are 5-4 overall and 3-3 in LSC play.

INSIDE THE BOX SCORE
– The Lions outgained the Buffs 375 yards to 286 and limited West Texas to 23 rushing yards on 26 carries.
– Kicker Kristov Martinez (Edinburg) became the LSC’s all-time leading field goal kicker with a 25-yarder in the second quarter for his 63rd career field goal. He finished the game with 11 kicking points, going 2-for-2 on field goals and 5-for-5 on PATs. He now has 405 career points, becoming only the third player in conference history to go over 400 points.
– Kane Wilson (New Orleans, La.) completed 12-of-15 passes for 131 yards and a touchdown. He also had a pair of rushing touchdowns to push his season total to eight rushing scores.
– Ovie Urevbu (Plano – Legacy Christian) had 20 carries for 118 yards. Carandal Hale (Greenville) had nine carries for 89 yards and a 7-yard touchdown.
– Ryan Stokes (St. Louis, Mo.) had three receptions for 85 yards. Vincent Hobbs (Mesquite – Horn) was the recipient of a 2-yard touchdown completion.
– Kader Kohou (Euless – Trinity) had six tackles to lead the Lions, including two tackles for loss and a key pass breakup.
– Dominique Ramsey (Converse – Judson) had an 84-yard interception return for a touchdown.
– L.A. Dawson (Austin – LBJ) and D.D. Fletcher (Arlington – Martin) each had fumble recoveries at key moments in the game.

HOW IT HAPPENED
The Buffaloes were the first team to find their way to the scoreboard after the teams traded punts on their opening drives. West Texas converted on third down three times in the drive and punched in a 3-yard touchdown run to go up 7-0 with 6:18 left in the first quarter.

A&M-Commerce answered with a seven-play, 67-yard touchdown drive. Urevbu had a 12-yard carry, Hale busted a 24-yard run, and Marquis Wimberly (Duarte, Calif.) had an 11-yard reception on the drive. Hale’s 7-yard touchdown plunge tied the game at 7-all with 4:14 left in the opening frame.

After trading punts, the Lion defense forced a turnover in a key position to set up the next score. Pierre Leonard (Tyler – John Tyler) sacked WT quarterback Justin Houghtaling and forced a fumble, which Fletcher recovered at the Buff 11-yardline. Three plays later, Wilson pushed across the goal line from the 1-yardline to give the Lions a 14-7 lead with 10:25 left in the first half.

The teams traded punts, but the Lions blocked the Buffs’ boot deep in their own territory. The Lions recovered at the WT 10-yardline and would eventually settle for Martinez’ record-breaking field goal from 25 yards out. The kick made it a 17-13 game and that score would carry to halftime.

A&M-Commerce received the opening kickoff of the second half and took advantage of a 33-yard return on a short kick by Reggie Kincade (Everman). The Lions needed only 42 yards to reach paydirt, most of which was taken up by a 31-yard Urevbu carry. Wilson’s second touchdown of the night made it a 24-13 Lion lead with 13:04 left in the third quarter.

Wilson found Stokes for a 68-yard completion on the first play of the next Lion drive, then connected with Hobbs in the back of the end zone from two yards out. That touchdown pushed the advantage to 31-13 with 8:13 left in the third quarter.

After the Buffaloes scored a field goal on their next drive, the Lions responded in kind. Martinez was the recipient of a rushing first down on a fake field goal attempt, then booted a 28-yarder true with 46 seconds left in the quarter. The Lions took a 34-16 lead into the final period.

West Texas was driving near midfield in the early portion of the fourth quarter when Houghtaling’s shot downfield was snagged by Ramsey at the A&M-Commerce 16. His weaving return eluded multiple Buffaloes as he went 84 yards for the final touchdown of the game. His score provided the 41-16 margin.

While the visitors threatened to score again, the Buffs’ Marshawn Brown fumbled near the goal line after a hard hit by Jalon Edwards-Cooper (Spring – Dekaney). Dawson recovered in the end zone for a touchback against his former school, snuffing out the Buffaloes’ final chance at points.