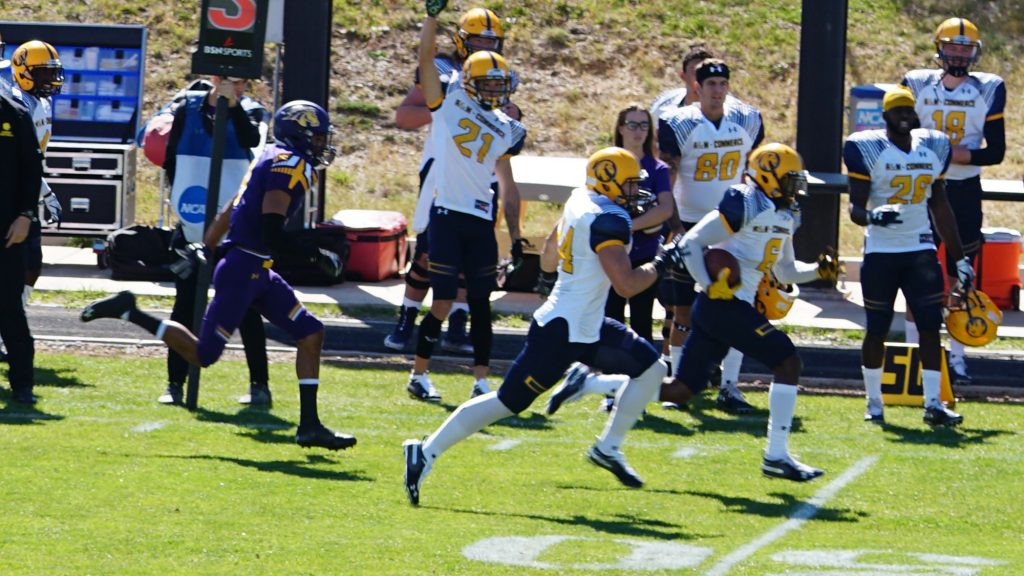 Big special teams and defensive plays proved to be the catalyst for the No. 18 Texas A&M University-Commerce football team in a 55-7 victory over Western New Mexico University at Ben Altamirano Field on Saturday afternoon.

With the win, the Lions move to 6-2 overall and 4-1 in the Lone Star Conference, while Western New Mexico falls to 0-7 overall and 0-5 in league play.

The Lions return to Commerce next week for the annual Homecoming game, hosting West Texas A&M at 4 p.m. on October 27. Tickets are available by visiting WeAreLionsTix.com, calling (903) 468-8756, or visiting the Lion Sales & Service Box Office in the Field House.

INSIDE THE BOX SCORE
– The Lions scored 34 points in the second quarter to set a school record for points in a quarter. The surge broke the previous record of 32 points, which was set by the Lions in the second quarter at Angelo State in 1991.
– Offensively, the Lions outgained WNMU 350-263. The Lions scored three non-offensive touchdowns in the game.
– Danny Huckaby (Mexia) had a 64-yard interception return for a touchdown, followed by a 51-yard interception return for a score by Kader Kohou (Euless – Trinity). Michael Onuoha (Edmond, Okla.) also had a long interception return to set up the Lions’ first score.
– Reggie Kincade (Everman) returned a kickoff for a 70-yard touchdown, marking his second consecutive game with a kickoff return for a score.
– Kane Wilson (New Orleans, La.) completed 12-of-21 passes for 136 yards and two touchdowns.
– Marquis Wimberly (Duarte, Calif.) was on the receiving end of both touchdowns, from 10 yards and 39 yards out. He finished the day with six catches for 97 yards.
– Nate Davis (San Antonio – Madison) had 14 carries for 57 yards and a 10-yard touchdown. Ovie Urevbu (Plano – Legacy Christian) had five carries for 44 yards and touchdowns of 8 and 28 yards.
– Neema Behbahani (Plano) had a team-high nine tackles with a sack and two tackles for loss. The Lions tackled the Mustangs behind the line a total of 12 times.
– Kristov Martinez (Edinburg) added seven PAT points to run his career total to 394 points.

HOW IT HAPPENED
Neither side was able to change the scoreboard in the first quarter, as long drives bogged down near midfield. Onuoha changed the tone of the game on the first play of the second quarter, intercepting a Mustang screen pass on fourth down and returning it 48 yards to the WNMU 12-yardline. Three plays later, Wilson completed a 10-yard touchdown pass to Wimberly for the first points of the contest.

A&M-Commerce perfectly executed an onside kick, then drove 47 yards in six plays for a score, making it 27-0 on Urevbu’s 8-yard plunge.

Western scored its only points of the game on a five play drive assisted by a pair of pass interference calls. Quarterback Gabriel Tomaszewski carried it in from two yards out to but the lead to 27-7 with 45 seconds left.

The Mustangs tried to kick off short to avoid the dangerous Kincade, but the senior rushed up to take the return 70 yards to the house untouched, giving the Lions a 34-7 lead at the halftime intermission.

Chris Smith (Mansfield – Legacy) blocked a punt on the opening drive of the second half. Two offensive drives later, the Lions scored on a beautiful 39-yard completion from Wilson to Wimberly, making it 41-7.

After WNMU’s punt on the ensuing drive went only 14 yards to the Mustangs’ 28, Urevbu rushed in around the left end on the next play, pushing the lead to 48-7 with 3:44 left in the third quarter.

The freshman Davis punched in the touchdown on the third play of the fourth quarter, putting a capper on an emphatic road victory.