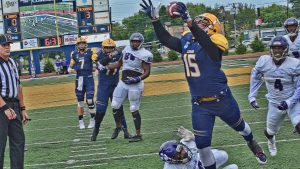 The No. 7 Texas A&M University-Commerce football team was within one score late in the third quarter, but ultimately fell to No. 16 Tarleton State University, 47-21, at Ernest Hawkins Field at Memorial Stadium on Saturday afternoon.

INSIDE THE BOX SCORE
– Quarterback Kane Wilson (New Orleans, La.) accounted for two touchdowns, passing for one and rushing for one. He completed 18-of-31 passes for 232 yards and a 9-yard touchdown to Vincent Hobbs (Mesquite – Horn). Wilson also had nine carries for 23 yards and a 3-yard touchdown.
– Carandal Hale (Greenville) was the Lions’ top rusher, carrying the ball 13 times for 61 yards.
– Marquis Wimberly (Duarte, Calif.) caught seven passes for 69 yards.
– Reggie Kincade (Everman) was electric in the return game, returning a kickoff 100 yards for a touchdown. He had five total returns for 208 yards.
– The Lions were outgained 486-360 and fell victim to 18 penalty calls.
– Mark Westbrook (Schertz – Clemens) had a team-best 11 tackles, while Kader Kohou (Euless – Trinity) had 10 tackles, two pass breakups, a tackle for loss, and a forced fumble.

HOW IT HAPPENED
Tarleton took the opening kickoff and drove downfield thanks to a long pass play. The Lion defense stood strong in the red zone and held the Texans to a 27-yard Joanly Martinez field goal with 11:57 left in the opening quarter.

The Lions executed a long drive of their own with their first possession. A 17-yard completion from Wilson to Ryan Stokes (St. Louis, Mo.) and a 21-yard swing pass to E.J. Thompson (Cy Ranch) set up Wilson’s 9-yard scoring strike to Hobbs. The one-handed grab made it a 7-3 Lion lead with 6:32 left in the first quarter.

The Texans were held on fourth down on the next drive, but were able to regain the lead at 10-7 with 28 seconds left in the quarter on a 50-yard touchdown pass from Ben Holmes to Savon Rollison. Tarleton extended the lead to 17-7 with 10:46 left in the first half after Xavier Turner’s 12-yard touchdown carry capped a long drive.

Tarleton took a 24-14 lead into the locker room at halftime after a 13-yard scoring pass from Holmes to Zimari Manning.

Coming out of the break, the Lions jumped on the offensive. Wilson completed a 46-yard pass to Stokes on the opening play of the half, then found Darrion Landry (Baytown – Lee) for a 19-yard completion. Wilson finished off the drive with the 3-yard scoring plunge, cutting the lead to 24-21 with 13:58 left in the third quarter.

The sides exchanged punts for the next 10 minutes before a mishandled snap was recovered by Tarleton and returned inside the Lion 10. A&M-Commerce’s defense did not budge, however, and limited the Texans to a 21-yard field goal, keeping the deficit at one score – 27-21 with 3:00 left in the third quarter.

Tarleton used an 11-play drive into the fourth quarter to push the lead to 33-21 on Turner’s 19-yard touchdown carry. The Lions were unable to recover the ensuing kickoff and Tarleton needed only three plays to score from the Lion 2, making it a 40-21 lead to the guests with 12:59 to go.

The Lions had their next two drives end in punts, and Tarleton’s Adam Berryman punched in a 6-yard touchdown carry to seal the final margin and give the Texans the President’s Cup for the first time in six years.