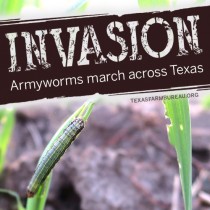 Texas has been invaded this year by armyworms. Conditions are perfect right now. The tiny larvae of a little brown moth are aptly named, as they bring great destruction on growing crops—like a great army on the march.

This year’s battle with the pest summarizes the story of farmers’ and ranchers’ ongoing battle with destruction. Armyworms are voracious and destructive in the extreme.

These invaders leave devastation in their path. The problem calls for careful management, but when they do strike, speedy response is critical. A field can be stripped of its crop in a matter of hours.

It’s just one of many perils that can hit a farm or ranch. The investment of seed, nutrients and other inputs is often a staggering number. It can disappear in an astonishingly short time by hailstorm, flood or an invading army of worms.

Decades ago, there was little that could be done to save a crop from armyworms. Today, modern agriculture has found solutions.