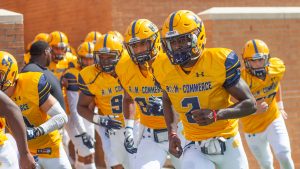 The No. 7 Texas A&M University-Commerce football team faces yet another nationally-ranked opponent, as the Lions and No. 16 Tarleton will battle for the President’s Cup and the top spot in the Lone Star Conference.

LSC’S TOP TEAMS BATTLE FOR PRESIDENT’S CUP
•   A&M-Commerce and Tarleton State battle every year for the President’s Cup and the Lions will look to hold onto the traveling trophy for the sixth straight year.
• The Lions are 15-11 all-time in the trophy game, with a 7-6 record in Commerce.
• The Lions have won the last six matchups (five President’s Cups and an LSC Playoff game) against the Texans, including last year’s 33-21 victory in Stephenville in the regular season finale.
•The Lions have won three straight in Commerce, with Tarleton’s last victory at “The Hawk” coming in 2012.
• The Lions won the first eight matchups, followed by the Texans winning 11 of 12 before A&M-Commerce’s recent six-game winning streak.

RANKED BATTLE YET AGAIN
• This is the Lions’ third game against a top 25 program in the seven games of the 2018 season.
• The last time the Lions played three ranked teams in the regular season was the 2015 season. The Lions went 3-0 against those teams to help their return to the NCAA playoffs.
• The Lions played three ranked teams in succession in the Super Region Four portion of the 2017 NCAA Division II Championship run.

HEAVYWEIGHT WEEK
• This game matches up the Nos. 7 and 16 teams in the nation, and is one of three games featuring a pair of top 20 teams. The other two are top 10 matchups.
• No. 2 Grand Valley State hosts No. 3 Ferris State, while No. 10 West Florida hosts No. 4 West Florida.

MOVING UP THE RANKS
• Head coach Colby Carthel now ranks fifth in A&M-Commerce history in coaching wins with 54 wins.
• He is now only nine wins behind Lion and LSC legend J.V. Sikes, who sits in fourth place with 63 wins.

SENIORS ON PACE TO SET SCHOOL RECORD
• The 2017 senior class established the school record for wins in a four-year period with the victory in the National Championship Game with 42 games won in a four year span.
• The 2018 seniors now rank second in school history at 38-8 with a guarantee of five more games in the season.

KNOCKING OFF UNDEFEATEDS
• The Lions have won their last five games against undefeated teams.
• A&M-Commerce knocked off Central Washington and Minnesota State in the 2017 playoffs.
• This year, A&M-Kingsville, William Jewell, and MSU Texas were handed their first loss by the Lions.

MARTINEZ CONTINUES TO CLIMB SCORING CHARTS
• Kicker Kristov Martinez scored 8 points vs. MSU Texas on 2-for-3 field goal kicking and 2-of-2 PATs.
• He earned his second LSC Special Teams Player of the Week honor for his performance.
• The graduate student from Edinburg is now 8-for-11 on field goal attempts and 22-for-22 on PAT attempts in 2018,
• He is now 62-of-82 on field goal attempts in his career, which is tied for sixth in Division II history. The Division II career record is 82 made field goals. Second place is 68.
• Martinez has now tied West Texas A&M’s Sergio Castillo for the LSC career record with 62 field goals.
• Martinez is the Division II active career leader in made field goals, and is tied for third in all NCAA divisions behind LSU’s Cole Tracy (80), Wisconsin’s Rafael Gaglianone (65), and tied with Toledo’s Jameson Vest (62).
• Martinez is on the preseason and September watch lists for the Mitchell Award.
• For his career, Martinez has made 198-of-205 PAT attempts and is the Division II active career leader. Oklahoma’s Austin Seibert is the all divisions active career leader with 261 made PATs. Martinez is fourth in all divisions behind Seibert, Ohio State’s Sean Nuernberger (216), and North Dakota State’s Cam Pederson (207).
• In terms of overall scoring, Martinez (384 points) is chasing Castillo (437 points), and former Harlon Hill winner at Texas A&I Johnny Bailey (426 points) for the all-time LSC scoring record.
• Martinez is also one of four Division II kickers with 60 or more consecutive PATs made.

HARRIS AWARD NOMINEE IS TOP TACKLER
• The Lions’ leading tackler in senior Brucks Saathoff is also one of the leaders in the Lone Star Conference.
• His nine tackles and block of a potential go-ahead field goal in the fourth quarter earned Saathoff Lone Star Conference Defensive Player of the Week honors.
• The San Antonio native is averaging 10.2 tackles per game through six contests, ranking 26th nationally and third in the LSC.
• In 2017, Saathoff was the Lion leader with 101 tackles, averaging 6.7 stops per game.
• For his career, Saathoff has 270 tackles, which is the leading mark for the Lions.

“BIG MIKE” BEHIND THE LINE
• Michael Onuoha (pronounced uh-no-ha) has been a menace in the backfield.
• The senior from Edmond, Okla., ranks 19th nationally in sacks per game, averaging 0.92 sacks per contest. He has 5.5 sacks for losses of 30 yards through six games.
• His sack against CSU-Pueblo was also a forced fumble, recovered by Saathoff.
• He is 14th nationally in tackles for loss, with 1.8 tackles for losses per game.
• Prior to the season, Onuoha was named an honorable mention All-American and second team all-region pick by Don Hansen’s Football Gazette. He was also a first team all-Lone Star Conference pick.
• “Big Mike” ranked seventh in the LSC with 12 tackles for loss and recorded 56 tackles in the 2017 season.

THOMPSON EARNS HONORS FROM LEAGUE
• Lion running back E.J. Thompson was named the Lone Star Conference Offensive Player of the Week for a strong overall performance in the weekend’s action.
• The sophomore from Cy Ranch rushed for a career-high 150 yards in the Lions’ 20-19 win over No. 4 MSU Texas.
• He accounted for more than 200 all-purpose yards and set up multiple scores in the victory.
• His long rush of 32 yards was the catalyst for the Lions’ first score, and two consecutive receptions setup another long drive.

RAMSEY’S RETURNS REAP REWARDS
• Sophomore return man and defensive back Dominique Ramsey has had two punt returns of over 70 yards and a long interception return to set up Lion scores.
• He has had a return of at least 40 yards in each of the last three games.
• In the MSU Texas game, he was the first player all season to intercept Mustang quarterback Layton Rabb, and his 41-yard return set up the Lions’ first scoring drive of the weekend.
• The Converse Judson product scored the opening touchdown of the game for the Lions against CSU-Pueblo with a 72-yard punt return for a score in the first quarter.
• In the Lock Haven game, Ramsey’s 71-yard return set up a score on the next play.
• Ramsey ranks 15th nationally this season with a 15.2 yard per punt return average and is one of only two players in the LSC with a punt return for a score this year.

TAKE THAT AND LIKE IT
• The Lion kicking game has been spectacular during the 2018 season.
• A&M-Commerce ranks first nationally in kickoff return defense, as Lion opponents average 8.82 yards per return. A&M-Commerce is the only school in Division II to average less than 10 yards per kickoff return allowed.
• Martinez had touchbacks on five of six kickoffs vs. MSU Texas, including a touchback on a free kick following a safety.
• A&M-Commerce ranks 12th nationally in net punting. The Lions average 38.9 yards net per punt.
• Tristan Perry averages 42.4 yards per punt, which leads the Lone Star Conference and ranks 26th nationally.