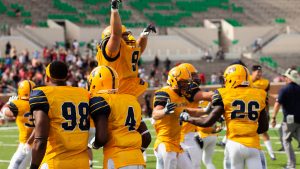 The football series between Texas A&M University-Commerce and Midwestern State University has had its share of close games, dramatic finishes, and stunning storylines over the last few years. None will top No. 9 A&M-Commerce’s 20-19 victory over No. 4 MSU Texas at Apogee Stadium on Sunday.

After the game was suspended at halftime Saturday in a 10-10 tie and the Lions could not find lodging within two hours of Wichita Falls, the game was moved to Denton. Both teams executed well on offense and defense, but special teams errors proved to be the difference.

The Lions turn around and host another top matchup in the LSC, welcoming Tarleton (5-0 overall, 4-0 LSC) in the battle for the President’s Cup. Kickoff on Saturday – which is Youth Sports Day – is set for 4 p.m. Tickets are available by visiting WeAreLionsTix.com, calling (903) 468-8756, or visiting the Lion Sales & Service Box Office in the Field House.

Lion fans can get up to four (4) general admission tickets to the Tarleton game for 50% off through Monday at 10 p.m. at WeAreLionsTix.com by using the coupon code “BEATTARLETON”.

INSIDE THE BOX SCORE
– The game was evenly played, with MSU Texas earning 431 yards to A&M-Commerce’s 428.
– E.J. Thompson (Cypress – Cy Ranch) had 150 rushing yards on 26 carries for a 5.8 yard per carry average. The Lions had 190 rushing yards as a team.
– Kane Wilson (New Orleans, La.) completed 17-of-28 passes for 238 yards with a touchdown and two interceptions.
– Ryan Stokes (St. Louis, Mo.) was the Lions’ top receiver with seven catches for 93 yards and a score.
– Kristov Martinez (Edinburg) was 2-for-3 on field goal attempts and tied the LSC career record for made field goals at 62 with his 26-yarder in the third quarter.
– Brucks Saathoff (San Antonio – Reagan) was the Lions’ leading tackler with nine stops, while Michael Onuoha (Edmond, Okla.) had eight tackles with 1.5 tackles for loss.

HOW THE FIRST HALF HAPPENED
The Lions opened the scoring with 9:42 to go in the first quarter when Martinez made a 20-yard field goal. The score was set up by an interception and 43-yard return by Dominique Ramsey (Converse – Judson).

MSU took a 7-3 lead on the ensuing drive, when quarterback Layton Rabb ran the ball in from eight yards out to cap an eight-play, 75-yard drive with 6:42 left in the first quarter.

The Lions retook the lead two drives later. Stokes made a leaping touchdown catch on a 24-yard pass from Wilson with 47 seconds remaining in the first quarter, giving the Lions a 10-7 lead.

In the second quarter, the teams traded missed field goals. MSU snagged an interception near midfield, then drive inside the Lion 5-yardline before the defense held, limiting the Mustangs to a field goal to tie the game at 10-all with 5:38 left in the half.

The Lions drove near the Mustang redzone, but the hosts intercepted a Wilson pass in the endzone. A&M-Commerce forced a punt going into halftime, followed by a lengthy weather delay before game officials determined the game should be completed Sunday.

SUNDAY’S SECOND HALF
The Lions opened Sunday’s action with three first downs before the drive stalled and they were forced to punt. MSU Texas responded with a seven-play, 80-yard drive, scoring on Vincent Johnson’s 9-yard touchdown carry. The Mustangs led 17-10 with 8:12 left in the third quarter.

Reggie Kincade (Everman) returned the ensuing kickoff for 41 yards, setting up a 51-yard drive that ended in Martinez’ 26-yard field goal. He tied the LSC career record and cut the MSU Texas lead to 17-13 with 4:14 left in the third quarter.

On MSU’s final drive of the third quarter, a favorable roll on a punt was downed at the A&M-Commerce 2-yardline. That set up a 98-yard, 13-play touchdown drive which spanned into the fourth quarter. The Lions converted on third down twice in the drive and were aided by an unsportsmanlike conduct penalty. Wilson carried the ball to paydirt from four yards out, giving the Lions a 20-17 lead with 11:22 to play.

Both teams were forced to punt on their next drive, but a miscue on A&M-Commerce’s punt proved costly. An errant snap flew over Perry’s head through the back of the end zone, cutting the lead to 20-19 with 8:53 to play.

The Mustangs drove down to the Lion 22 and attempted a field goal. The 39-yarder with 3:15 to play was blocked at the line by Brandon Bascue (Flower Mound), maintaining the Lions’ one-point margin.

A&M-Commerce was able to earn a first down on the next drive and force MSU to use all of its timeouts, but the Mustangs still got the ball back at their own 45-yardline with 52 seconds to play.

Midwestern earned a pair of first downs and got down to the Lion 13 after a substitution penalty. With the game in the balance, a 30-yard field goal attempt sailed wide right, sending the Lion sideline into jubilation as the blue and gold pulled out the win.