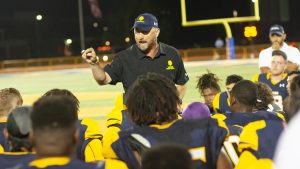 The No. 1 Texas A&M University-Commerce football team returns home for the annual CommUniverCity Day game and will play in Division II’s only matchup of two nationally-ranked teams this week, as the No. 22 Colorado State University-Pueblo ThunderWolves come to Commerce.

WE’RE GOING STREAKING
•  The win over Eastern New Mexico gave the Lions their 13th consecutive victory.
• The Lions are carrying the second-longest winning streak in school history.
• The longest streak was a 29-win streak spanning the final eight games of the 1951 season, all 11 games of the 1952 season, and the first 10 games of the 1953 season. The Lions finished the 1953 season with a tie in the Tangerine Bowl, so the unbeaten streak was completed at 30 games.
• Only four teams in all four divisions of NCAA football have a current winning streak of over 10 games.
• UCF has a 15-game winning streak in the Football Bowl Subdivision and North Carolina A&T has a 15-game winning streak in the Football Championship Subdivision.
• Neither of those teams were invited to their division’s playoff series, but both claimed national championships. UCF was the national champion in the Colley Matrix, which is recognized by the NCAA record book. N.C. A&T won the Celebration Bowl to take the Black College National Championship.
• Mount Union in Division III went 15-0 last season and has won the first two games of 2018, and carries the nation’s longest winning streak in all divisions at 17 games.
• Pittsburg State (D-II) and Centre (D-III) each have nine-game streaks and are the only other schools who could join the club this week.

ALL-TIME AGAINST THE THUNDERWOLVES
•  This is the first-ever meeting between these two schools in football.
• The Lions have played two other games against the RMAC. All three games against RMAC schools have been played in Commerce.
• The Lions defeated Adams State 48-17 in the 2015 season opener.
• A&M-Commerce defeated Colorado Mesa 34-23 in the first round of the 2016 NCAA Division II playoffs.

CARTHEL PICKS UP WIN NUMBER 50
• Head coach Colby Carthel now ranks fifth in A&M-Commerce history in coaching wins with 50 wins.
• He is now only 11 wins behind Lion and LSC legend J.V. Sikes, who sits in fourth place with 63 wins.

SENIORS ON PACE TO SET SCHOOL RECORD
• The 2017 senior class established the school record for wins in a four-year period with the victory in the National Championship Game with 42 games won in a four year span.
• The 2018 seniors now rank third in school history at 36-7 with a guarantee of nine more games in the season. The 1951-54 seniors also won 36 games, but had fewer losses than this year’s group.

MARTINEZ CONTINUES TO CLIMB SCORING CHARTS
• Kicker Kristov Martinez scored three points at ENMU, going a perfect 3-for-3 on PATs.
• The graduate student from Edinburg is now 3-for-5 on field goal attempts and 10-for-10 on PAT attempts in 2018,
• He is now 57-of-76 on field goal attempts in his career, which is tied for 10th in Division II history. The Division II career record is 82 made field goals.
• West Texas A&M’s Sergio Castillo has the LSC record with 62 field goals.
• Martinez is the Division II active career leader in made field goals, and ranks fourth in all NCAA divisions behind LSU’s Cole Tracy  (76), Wisconsin’s Rafael Gaglianone (63) and Toledo’s Jameson Vest (59).
• LSU’s Tracy is actually a Division II transfer from Assumption (Mass.), where he won the Fred Mitchell Award in 2017.
• Martinez is on the preseason watch list for the Mitchell Award.
• For his career, Martinez has made 186-of-193 PAT attempts and is the Division II active career leader. Oklahoma’s Austin Seibert is the all divisions active career leader with 242 made PATs. Martinez is fourth in all divisions behind Seibert, Ohio State’s Sean Nuernberger (199), and North Dakota State’s Cam Pederson (191 ).
• In terms of overall scoring, Martinez  (357 points) is chasing Castillo (437 points), and former Harlon Hill winner at Texas A&I Johnny Bailey (426 points) for the all-time LSC scoring record.

HARRIS AWARD NOMINEE IS TOP TACKLER
• The Lions’ leading tackler in senior Brucks Saathoff had one of the top games in Division II this season at Eastern New Mexico.
• The San Antonio native nearly doubled his season total in tackles, making 18 stops against the Greyhounds.
• The 18 tackles in a single game is tied for the fifth-most in Division II through three weeks of play.
• Newberry’s Joe Blue had 20 tackles in a game, and three players have 19 tackles in a game.
• Saathoff sacked ENMU quarterback Wyatt Strand 2.5 times, though the Greyhound quarterback only dropped back to pass 13 times in the game.
• The senior had a total of 4.0 tackles behind the line of scrimmage and was in on the tackle for just under a quarter of ENMU’s plays (18 tackles on 73 plays).
• Saathoff currently leads the league in tackles per game with 38 stops and an average of 12.7 tackles per game.
• In 2017, Saathoff was the Lion leader with 101 tackles, averaging 6.7 stops per game.
• For his career, Saathoff has 247 tackles, which is the leading mark for the Lions.

“BIG MIKE” BEHIND THE LINE
• Michael Onuoha (pronounced uh-no-ha) has been a menace in the backfield in the opening two games.
• The senior from Edmond, Okla., ranks fourth nationally in sacks per game, averaging 1.5 sacks per contest. He has 4.5 sacks for losses of 25 yards through three games.
• He is tied for ninth nationally in tackles for loss, with 7.5 tackles for losses of 35 yards.
• His averages of 1.5 sacks per game and  2.5 tackles for loss per game each rank third in the conference.
• Prior to the season, Onuoha was named an honorable mention All-American and second team all-region pick by Don Hansen’s Football Gazette. He was also a first team all-Lone Star Conference pick.
• “Big Mike” ranked seventh in the LSC with 12 tackles for loss and recorded 56 tackles in the 2017 season.

HALE’S HUNDRED HITS A THOUSAND
• Lion running back Carandal Hale ran for 101 yards in the win at Eastern New Mexico and capped his night with a 32-yard touchdown carry.
• With his performance in Portales, the sophomore from Greenville rolled his career odometer over the 1,000-yard  mark,
• He enters the CSU-Pueblo game with 1,026 career yards
• Hale is the 37th Lion back to roll past 1,000 career rushing yards.
• He is the third Lion running back to go over 1,000 yards in the Carthel era, joining Richard Cooper (3,174 yards from 2013-16) and Theo Wofford (1,306 yards from 2014-15).
• Only seven Lions have gone over 2,000 yards in their careers.

PERRY BOOMS THE PUNTS
• Sophomore punter Tristan Perry had seven punts at Eastern New Mexico and averaged 40.7 net yards per punt.
• His long punt of 68 yards was the longest in the Lone Star Conference this season and one of three over 45 yards in the game.
• The Mineral Wells product ranks second in the LSC and would be 21st nationally in punt average at 43.5 yards per punt.
• The NCAA requires a player to average 3.6 punts per game to be listed in the national rankings and Perry has only unleashed 10 punts in three games for a 3.3 punt per game average.
• As a team, the Lions rank second in the LSC and 24th in the nation in net punting at 39.14 yards per punt.
• The coverage of those punts has been exceptional, as no opponent has attempted a punt return on 14 boots.
• The 0.00 punt return average ranks 11th in the nation and is tied for the conference lead.