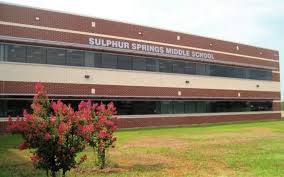 “There seem to be many stories going around social media this morning about the events at the Sulphur Springs Middle School. I hope this will clarify and present the facts of the situation.

This morning at around 8 a.m. officers responded to the Sulphur Springs Middle School in reference to a male subject that had been seen in the area of the school wearing all camouflage, including face paint. Officers responded to the school and immediately set up a perimeter around and placed additional officers inside the school. Officers began checking the immediate area and found a male subject matching the description walking on Highway 19 south at the city limits. When officers made contact with the subject he was found to be dressed in all camouflage and had in his possession a camo facemask as well as machete. Officers continued to investigate the situation and learned that the subject had never been on school property. Officers also learned that the subject was under the influence of drugs and was taken into custody for Public Intoxication and Disorderly Conduct. As a precaution the school was placed on lockdown till officers could locate the subject.”

“This morning around 8 a.m. Officers responded to the Sulphur Springs Middle School in reference to a subject walking in the area of the school dressed in all camouflage. Officers located a subject matching that description walking on Hwy 19 South. At this time, the subject has been brought in for questioning. The school was placed in lockdown but that has now been lifted.”

UPDATE: The subject is an adult male and was found in a field behind SSMS. In addition to wearing camouflage, his face was also painted in camouflage.

We will continue to monitor and update the story as soon as details are available.