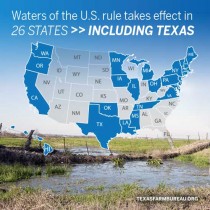 The Waters of the United States (WOTUS) rule, one of the most onerous to ever crawl out of the regulatory swamp, has returned to potentially harass farmers, ranchers and other businesses.

A U.S. District Court in South Carolina invalidated the Trump administration’s two-year nationwide delay of the rule on Aug. 16. The court ruled the administration had not allowed enough time for comment.

The ruling applies to 26 states, including Texas, or everywhere the rule is not otherwise delayed by injunction. Just over half the country will be subject to it.

It’s a bad idea now for all the reasons it was at the start.

WOTUS was written to take many farming and ranching decisions out of the hands of the people on the land. It seeks to extend federal control over all land virtually everywhere. That includes land that is not even wet most of the time.

Now, more than ever, it’s time to ditch the rule.

Hearts of Life Animal Rescue Dog of the Week-Meet