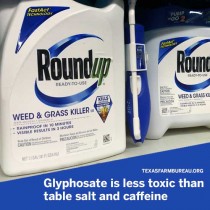 Do juries always get it right? No. That’s why there are appeals courts.

A jury in California recently got one very wrong. Sometimes, when you throw a lot of emotion at a jury, they react with emotion.

San Francisco Superior Court heard the case of a man with non-Hodgkin’s lymphoma, which he believes was caused by the weedkiller glyphosate. He used the chemical routinely on his job.

Reams of studies show conclusively that glyphosate is safe.

This chemical replaces many others that are far more toxic. The Journal of the National Cancer Institute investigated cancer incidence among nearly 45,000 licensed pesticide applicators exposed to glyphosate. They found no evidence linking it with non-Hodgkin’s lymphoma or other cancers. That’s “no” as in zero.

Juries are not empowered to change science on a whim. But the army of lawyers lined up to cash in on this mistake understand if you can’t win on the science, go with fear and emotion.