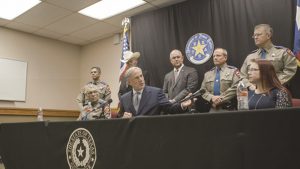 Governor Greg Abbott today unveiled the “Damon Allen Act,” a set of proposals to reform the bail system in Texas to protect law enforcement and enhance public safety. The proposals announced by the Governor are in honor of Texas State Trooper Damon Allen, who was killed in the line of duty on Thanksgiving Day, 2017. During today’s announcement, the Governor was joined by the Allen family as well as members of the Texas legislature and Texas Department of Public Safety.

“With the Damon Allen Act, Texas will take meaningful steps to reform our bail system so that we can better protect innocent life, keep violent criminals off our streets and prevent tragedies like the death of Damon Allen,” said Governor Abbott. “It’s time for action, and I urge the legislature to take up the Damon Allen Act in the upcoming session. I thank Kasey Allen for her tireless work on this effort and the entire Allen family for their inspiring strength in the aftermath of this tragedy.”

This past Thanksgiving, Officer Allen was ambushed, shot and killed in Freestone County following a traffic stop. His accused murderer had previously been convicted of assaulting a sheriff’s deputy, and had recently been arrested on charges that included evading arrest and aggravated assault on a public servant. Despite his criminal record he was released on bond because The Justice of the Peace in his case was unaware of his prior convictions. The Governor’s new proposals to reform Texas’ bail system aim to help prevent tragedies like the death of Trooper Allen.

The Damon Allen Act is designed to increase public safety and the personal safety of law enforcement, promote consistency across the state, and uphold the constitutional rights of those accused of crimes.

Specific proposals included in the Damon Allen Act are outlined below.

The practice of bail and the issuance of a bond is regulated by Texas Code of Criminal Procedure, Chapter 17. These rules limit the discretion that a judge may use in ensuring the safety of the community. The rules setting bail should be modified to emphasize the safety of the community, require a magistrate consider the criminal history of a defendant, and allow a magistrate to consider all other relevant information, including impact on law enforcement.

The amount of bail required may be set by any magistrate. In addition to a determination of the danger posed to the community by a defendant’s release, a magistrate must consider technical issues of mental health, and family violence. For cases involving felony offenses, or misdemeanors involving sexual offenses and assault, these determinations should be done by District Court judges and their associate judges.

It is critical that judges have ready access to relevant information in order to set bail. The creation of a uniform Court Management System through the Office of Courts Administration can close critical information gaps, especially in counties with a population under 20,000. This system will ensure that magistrates have a full picture of a defendant’s criminal history and mental health involvements, and alert them to protective orders.

When a defendant is being supervised for prior criminal conduct, whether through parole, probation, or bond, additional steps should be taken prior to admitting them to bail. Once a magistrate determines that a defendant is being supervised by another agency, that agency should be notified. These notifications can be expedited through the case management system that links magistrates with the appropriate agency.