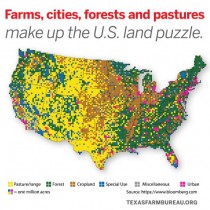 Farms, cities, forests and pastures are intertwined in America, a country with 1.9 billion acres in the 48 contiguous states.

But how is that land divided?

Parks and wilderness areas make up about 100 million acres, while forests and timberland are about a quarter of the contiguous U.S.

What about urban areas? They make up just 3.6 percent of the total size, but the U.S. is becoming increasingly more urban. A surging population gobbles up 1 million acres, on average, each year.

And urban areas have more than quadrupled since 1945.

America’s land use is diverse, which helps us sustain ourselves. But private land is necessary and important for water conservation, growing food and maintaining wildlife habitat.