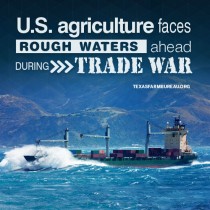 A reporter recently asked me “Who do farmers blame for the current trade war between the U.S. and China?” It’s a fair question because farmers are indeed feeling the lion’s share of pain.

It’s also a complicated question. Farmers do much better when trade disputes are negotiated before they escalate. But all was not rosy before this started. Agriculture has been victimized for years by unfair trade practices, especially by China.

The Chinese are essentially ignoring the World Trade Organization rule book. They exceeded the amount of allowed domestic subsidies by as much as $100 billion in 2015. This distorts the world market. Many farmers don’t object to China answering for that.

Compare that to the North American Free Trade Agreement (NAFTA) where everyone mostly plays by the rules. Any 24-year-old agreement could stand some tweaking, but NAFTA is essentially sound.

Who’s to blame? Most farmers say, fix it, and blame won’t matter.

Hearts of Life Animal Rescue Dog of the Week-Meet Will!