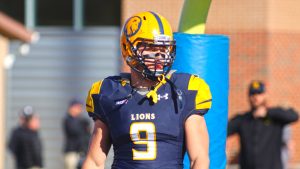 The 2017 National Champion Texas A&M University-Commerce football team has been ranked No. 5 nationally in the College Football America Yearbook Preseason Poll. Lion linebacker Brucks Saathoff has been named to the Division II Starting Lineup, CFA’s version of an All-America team.

The Lions went 14-1 with five playoff victories to win the national title over preseason No. 1 West Florida. A total of 43 letterwinners and 14 starters – five on offense and nine on defense – return for the Lions, who closed the season on a 10-game winning streak, which is the longest active winning streak in Division II.

The Lions are entering their sixth season under head coach Colby Carthel and are looking to make their fourth consecutive NCAA Division II Championship appearance and sixth straight postseason appearance. This is A&M-Commerce’s third preseason top 10 ranking in 2018 after earning a No. 6 ranking from Street and Smith’s and No. 7 ranking from Lindy’s.

Saathoff – a senior linebacker from San Antonio’s Reagan HS – has led the Lions in tackles for the last two seasons. In 2017, Saathoff was the Lion leader with 101 tackles, averaging 6.7 stops per game. For his career, Saathoff has 209 tackles, which is the leading mark for the Lions. His 12.5 career tackles for loss is the second-leading returning mark on the squad. Saathoff and safety Chris Smith are the only two returning defensive players to have played in all 39 games in the last three seasons.

Saathoff was a first team all-Lone Star Conference selection at linebacker in 2017 after earning honorable mention all-LSC in 2016. Don Hansen’s Football Gazette honored Saathoff with second team all-region honors and honorable mention All-America. Saathoff was also one of 30 Division II finalists for the Cliff Harris Award, which is presented to the top defensive player in the country representing Division II, III and NAIA colleges and universities.

Saathoff is one of three Lion student-athletes who will represent the Lions at the annual Lone Star Conference Media Day in his hometown of San Antonio on Tuesday.

The Lions are slated to play two teams in the College Football America Yearbook Preseason Top 30 in the regular season. The annual CommUniverCity Day game will be played on Saturday, September 22, against No. 11 Colorado State-Pueblo. The Lions will play No. 13 Midwestern State on the road on Saturday, October 6.