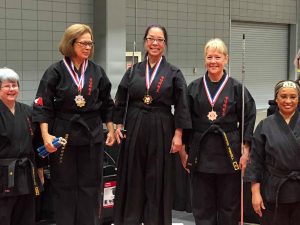 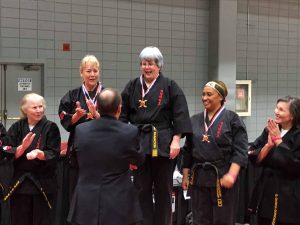 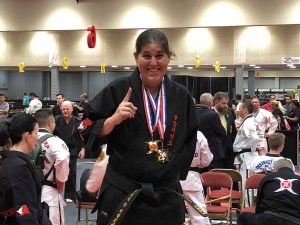 Little Rock, AR – Three members of Sulphur Springs ATA Martial Arts have won World Championship titles during the first day of the Songahm World Tournament of Champions. Out of over 21,000 unique competitors, the World TOC is an invitation-only competition featuring the top students who have qualified by winning competitions throughout the season.

Ms. Taanya Weir won her first World Championship title by winning the Black Belt Women 60 and above Creative Weapons competition. Her routine featuring the traditional gum do sword earned the highest score possible from all judges.

Ms. Janie McMackin later completed the Sulphur Springs sweep of the weapons events when she earned the victory in Black Belt Women 60 and above Extreme Weapons competition. This is the 2nd World Championship for Ms. McMackin after winning the same competition in 2016.

Master Melissa Bilyeu ended the competition day repeating as the gold medalist in both Creative and Extreme Weapons for the 6th-7th Degree Masters 27-39 Division. Bilyeu also took Silver in the Combat Sparring competition.