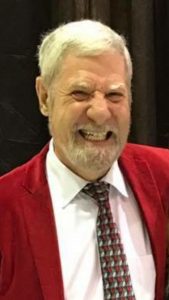 It is with great sadness that the family of Morris Tobin announces his passing after a series of unexpected complications of surgery. Morris fought a hard battle until the end.

Born in New York City on Sept. 22, 1945, to Dr. Louis and Eleanor Tobin, Dr. Tobin grew up in Mt. Vernon, New York, where he graduated from A.B. Davis High School with honors.

He attended the University of Pennsylvania receiving his undergraduate degree (B.S. in Chemistry) in 1967 and his Doctor of Medicine (M.D.) in 1971. He went on to receive his specialty training in Internal Medicine and a fellowship in Nephrology at the University of Buffalo. After completing his training, Dr. Tobin relocated with Chris Norton and his children Aaron and Lisa to Paris, Texas, to start his private practice in 1979.

Morris Tobin had two loves in his life, his family and his patients. He was a loving husband, father and grandfather, who cared passionately about the community he lived in.

Dr. Morris Tobin served the Northeast Texas and Southeast Oklahoma community for almost 40 years as a devoted physician. Dr. Tobin helped establish the first dialysis unit in Northeast Texas along with the Sisters of Charity of the Incarnate Word from San Antonio.

Throughout his career he served as Chief of Medicine at St. Joseph’s hospital in Paris, Texas, served on various committees at St. Joseph’s and McCuistion hospitals, some included ICU, Pharmacy and Infection Control. Dr. Tobin worked as a consulting physician for the Choctaw Nation in Oklahoma, since starting his practice in Paris. Most recently he was on staff at Trinity Mother Francis in Sulphur Springs, Texas.

Dr. Tobin was devoted to his practice and his patients. Over the years, he crossed paths with many people from all walks of life. He developed lasting friendships with many. He routinely took care of those who could not afford to pay for medical care and was a huge supporter of indigent care programs. He supported many charitable organizations within the community including Salvation Army, Casa for Kids and Meals on Wheels. He was a large advocate and supporter of Doctors Without Borders.

Amy Miller and Pam “Bulldog” Bratcher were devoted to working side by side with Dr. Tobin for 18 years through the good, the bad and the ugly times. More recently his dedicated employees, Andrea McCullough, Samantha Weedon, Kayla Dixon, Kristi Hale and Eileen Lahman, continued to work hard even during his time of illness.

When not practicing medicine, Dr. Tobin enjoyed spending time with his family, playing tennis, reading, dancing and traveling with his wife, Jodi.

He was preceded in death by his father; mother; and brother, Edward “Eddie” Tobin.