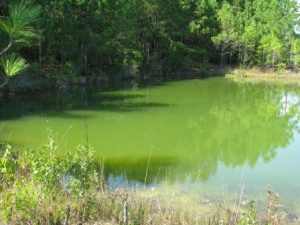 Earlier in the week, the Texas A&M AgriLife Extension Office in Sulphur Springs received several phone calls related to algae in ponds. In general, aquatic vegetation often gets called algae, a loose controversial term that can lead to confusion when people try to describe plants living in ponds. Must aquatic plants serve an ecological purpose in the pond. Sometimes, the same plants can overtake ponds and create problems. According to UGA extension,

cyanobacteria, blue-green algae, harmful algae, and toxic algae are words that can confuse people who are trying to decide on pond water safety. Certain algae can cause serious problems when they become very abundant in drought, hot weather, unusual rainfall patterns, or after nutrient accumulation in pond water. Fortunately, most ponds do not experience toxin problems or dense algal blooms. Watching for the warning signs that lead to toxic algal bloom development is the best way to prevent toxin problems. Cyanobacteria is a descriptive name for blue-green algae, used by taxonomists and scientists. Cyanobacteria are common algae that usually float in the water column or attach to the pond bottom or another surface in the pond. Harmful algae are a very small number of species that may produce toxins, odors or off-flavors. Toxic algae is the name given to an even smaller number of species, including cyanobacteria (responsible for most cases of algal toxins), euglenoids, and dinoflagellates that produce chemicals that irritate skin, damage the liver, or affect the brain. These effects can be quite serious but are uncommon in fish ponds. A toxin producing algae must be present at a high density and must be producing toxin for dangerous conditions to be present. Since many ponds do not have dense algal blooms, few pond owners have experience with toxic algae. Weather conditions may be responsible for the development of toxic algal blooms. Under normal conditions, the nutrients phosphorus and nitrogen gradually move downstream from ponds after rainfall. During dry weather, pond water volume recedes, and runoff no longer flushes the pond. Reduced water volume concentrates phosphorus and other nutrients. Nutrients, heat, and sunlight allow algae to grow at a rapid rate, and dense algal blooms may develop. Certain cyanobacteria species can dominate the algal population to the point of becoming a single-species bloom. Algal bloom density can increase until a thick scum resembling pea soup or latex paint is formed. The color of the bloom may be light blue-green, bright green, green-brown, or even chocolate. At that point, the danger from toxins is most apparent. Animals are in danger when they drink the algae along with water. Dense single-species blooms are subject to sudden die-offs. When toxic algae die, the toxin they contain is released. More often, odors and taste from chemicals produced by algae cause drinking water or fish to become unacceptable to humans. If a pond looks stagnant with an algal scum, take precautions against animal exposure. Choose an algal control plan that includes early monitoring for cyanobacteria and selecting a control method. Copper or sodium percarbonate are good treatments for blue green algae control. Consider moving animals away from the pond or restricting access to the water when toxins are discovered. Install animal drinking water structures so that grazing animals do not drink from the pond edge. Consider a nutrient control program to prevent the pond from developing harmful algal blooms in the future. For more information on this or any other agricultural topic please contact the Hopkins County Extension Office at 903-885-3443 or email me at m-villarino@tamu.edu.

Summer is Here-Too Much Sun Hurts by Johanna Hicks