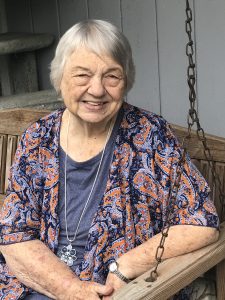 Danna Elaine (Brashier) Elliott passed from this life into her loving Savior’s arms on May 4, 2018, after a long battle with cancer.

Born in the Rose Hill community in Dallas County, TX, to Clifton Leonard and Ellen (Lyons) Brashier, Danna Elaine Brashier spent all her growing up years on the family homestead and farm, located on a road named after her great grandfather, James Lyons. She attended Rose Hill School (where she skipped two grade levels) and later graduated from Garland High School when she was only sixteen.

Later Danna attended East Texas State Teachers College (now East Texas State University) where she met the love of her life, Herbert. As the story goes, he strolled into the student union building and proceeded to fall hopelessly in love with her as she played the piano. Herbert and Danna married on April 30, 1954, and eventually moved from North Texas to San Antonio, where they spent the majority of their sixty-four years together. For sixteen years, they lived in Dike, Texas (near Sulphur Springs), eventually returning to San Antonio.

Herb and Danna raised four happy children. Danna was a “stay-at-home mom” who did anything but that. She was involved in her children’s lives as PTA president, room mother and substitute teacher. One of her greatest joys was being a Girl Scout leader and trainer, for which she was presented with the Girl Scouts “Thanks Badge” that is given to adult volunteers that provide service “so significantly above and beyond the call of duty that no other award would be appropriate.” Danna also enjoyed serving as a Cub Scout den mother. She later founded the Valley Hi Girls Softball League, serving as its president.

The Elliotts were charter members of Lackland Terrace Church of Christ, where Danna spent several years as church secretary. Sharing her love for Jesus, she stayed very involved as a much loved Ladies Bible Class teacher and children’s Bible Class teacher. Danna also served as the president of the Christian News of South Texas.

Other ventures included General Manager of the Citizen News community newspaper and later co-owning and operating a local Kwik Kopy franchise. During Danna’s time in Dike, she served as president of the Hopkins County Genealogical Society and was designated as its first President Emeritus. Danna also served as treasurer of the Texas State Genealogical Society and president of the Springvale Neighborhood Association.