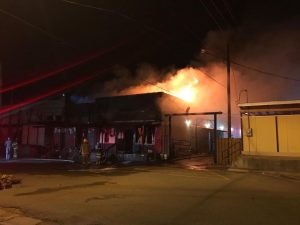 Lone Republic Steak House and Saloon in Winnsboro has announced that their building caught fire early this morning. The damage is reportedly severe but some neighboring businesses have announced that they did not sustain any serious damage. No injuries have been reported.

We are sad to announce that Lone Republic Steakhouse burned this morning. Thanks to the local and area fire fighters for their effort to keep the blaze from severely damaging other businesses.