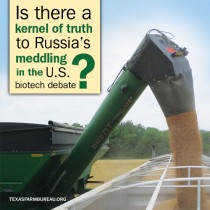 There are lots of headlines these days about Russia trying to influence Americans. Recently, Iowa State University has been investigating Russian efforts to feed clickbait into the debate over biotechnology or GMOs.

Like most online anti-biotech material, there is little truth in the claims, but perhaps some advantage for Russia.

This debate is the most contentious agricultural issue of the last quarter-century. Many in the “anti” camp have vested interests. Modern agriculture does, too, but tends to have science on its side.

Russia is no different. The U.S. is the world leader in biotechnology. Russia could benefit from hamstringing U.S. progress. They may also have concluded that influencing this emotional debate might divide Americans.

Hearts of Life Animal Rescue Dog of the Week-Meet Rowdy!