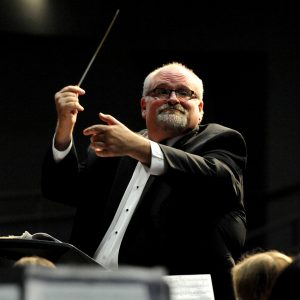 Late Thursday night I walked through the door, hugged my dad, and immediately went up to my old room.  I opened the closet and began looking for Wildcat colors from my days as a student at Sulphur Springs High School (“SSHS”). Charlie McCauley, Director of the SSHS Band and the Sulphur Springs ISD Fine Arts program, died early last Sunday morning. His memorial service was Saturday in the high school gym, a location where he led countless renditions of the fight song and the alma mater for pep rallies and games. Attendees have been asked to wear the colors of the teams Mr. McCauley(his students call him “Mr. Mac”)supported including: Pittsburg Steelers, Arkansas Razorbacks, Sulphur Springs Wildcats, Quitman Bulldogs. It’s Mr. Mac’s memorial service that brought me, and so many others, back home this weekend. I’m a 2004 SSHS alumnus and was in Mr. Mac’s band for all four years of high school. So, I searched the closet for some Wildcat colors and came across my old letterman jacket.

Traditionally, letter jackets were awarded to high school athletes on the varsity football and basketball teams. Then letterman status spread to varsity athletes in all sports. By the time I was in high school, students could earn a letter jacket for excelling in a myriad of areas, including fine arts programs. My old jacket is looking worn, but each mark and fray brings back a memory of Friday night lights and performing at halftime.

For many of us, Mr. Mac was the best “coach” we ever had. Beyond physical health, one of the greatest benefits of athletics are the many learned values and skills that transcend sport and affect every aspect of life. In team sports, athletes learn how to be individually responsible for their own progress and performance while realizing that they win and lose as a team. It’s the life lesson of maintaining personal accountability while living in community with others. Mr. Mac taught this to his students.

Mr. Mac’s maxim was FEETDIP; Fun, Excellence, Excitement, Togetherness, Discipline, Integrity, Pride, and Potential. He taught his students that the way they performed was a direct result of how they practiced and that every day they should strive to be better than the day before. He taught his students how to set goals, how to achieve those goals, and how to celebrate and honor that accomplishment.

Fourteen to eighteen-year-olds don’t have a reputation for having great self-awareness. Part of what made Mr. Mac so wonderful was his ability to see the potential in each of his students. He knew how to bring to the surface the greatness in each of his kids. He saw leadership abilities in us that we didn’t yet see in ourselves, and he pushed us to realize what we could become.

He taught his students that a strong work ethic is paramount, and that success comes requires sacrifice and comes about as a direct result of hard work. When I touch my letter jacket I am transported back to a hot summer night a few weeks before classes officially begin. The sun has begun to set and the parking lot is filling with the cars of parents ready to pick up their kids. My classmates and I stand at “attention” and my chest heaves as I replenish the oxygen I just expelled making sure I crushed the final note of the song.  I’m tired from marching and sweat rolls onto the lens of my glasses from the heat. Mr. Mac is speaking words of encouragement. He is praising us for making the decision to practice rather than sitting at home. He is praising us for choosing to be a part of something larger than ourselves. As he speaks, I’m filled with a sense of pride, belonging, and value.

More than 15 years later I will stand in my closet and I still won’t have the vocabulary to express the emotions, qualities, and virtues Mr. Mac is teaching. But Mr. Mac knows these lessons are challenging to describe (especially for teens) and in his wisdom he has condensed it all into a single acronym. The word rings out a hundred voices strong as we walk off the field. We are literally and symbolically taking our next steps forward. FEETDIPP!