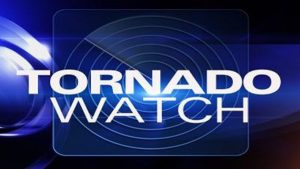 A tornado watch is issued when weather conditions are favorable for the development of severe thunderstorms called a supercell that are capable of producing tornadoes. A tornado watch must not be confused with a tornado warning. In most cases, the potential exists for large hail and/or damaging winds in addition to tornadoes. A watch does not mean that the severe weather is actually occurring, only that atmospheric conditions have created a significant risk for it.