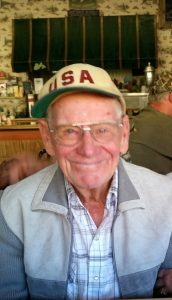 Graveside service for Benjamin Franklin “Frank” Moss, age 88, of Merrill, OR and formerly of Hopkins County, TX will be held 1:00 PM on Monday, January 8, 2018 at North Hopkins Cemetery with Rev. Bruce Stinson officiating.  There will be no formal visitation.  Mr.  Moss passed away at 4:00 p.m., Wednesday, December 27, 2017, at his residence in Merrill, Oregon.