PAMPA STREET –The street has been repaved; the utilities have been replaced, and the curb and gutter has been repaired.  All that we lack is a little cleanup.

STREET IMPROVEMENT PROGRAM–Expect the following streets to be repaved in January: Calvert, Junell, Beth/Rasure/Rose and a portion of Gossett Lane.  Also expect portions of Woodside Lane to be reconstructed totaling 400 linear feet.

CANTEX FORCE MAIN – This will be our next capital improvement project.  It will replace 2,400 linear feet of aging sewer force main and 2,900 feet of gravity main.  Currently the main passes through the middle of the hospital complex.  This would be a nightmare if the main ever ruptures.  The proposed route would go around the hospital complex rather than through it. One third of the city’s sewage passes through this line. 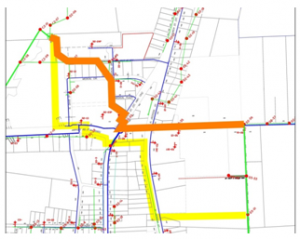 WASTEWATER TREATMENT PLANT–The work at the wastewater treatment plant is on schedule.  The three primary clarifier basins have been constructed, and the effluent troughs are being constructed now.Other concrete structures adjacent to the clarifiers are under construction.

CROSSTOWN TRAIL – The Capital Construction Division began constructing the Crosstown Trail in November.  This grant-funded project will connect Buford Park to Coleman Park as well as the high school/civic center complex with a concrete path.  It will also replace the sidewalk on the north side of Connally Street.

CLAIMS – There were no liability claims and only one workers’ compensation claim in December.  It was a minor claim.

REVENUES AND EXPENDITURES –There will not be a report of revenues and expenditures since the month just ended on Sunday.  The report will resume next month.