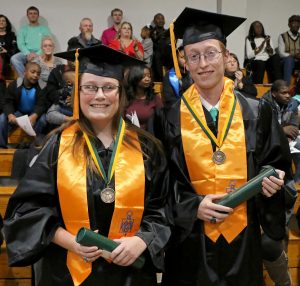 Graduates this fall ranged from 63 to 17 years of age, and came from four states — Texas, Oklahoma, Minnesota, and California.

According to PJC President Dr. Pamela Anglin, this year there were 122 male and 108 female graduates, a change from a longtime trend of women outnumbering men.

Among the youngest graduates were 17-year-old twins Rachel and Samuel Stanley of Sulphur Springs. Both received associate of science degrees through PJC’s dual credit program at North Hopkins High School, where they will graduate in May, and both earned highest honors for earning a 4.0 GPA.

Another local graduate was Kaci Renee Powers of Sulphur Bluff, who obtained her Associate of Applied Science in Radiology. 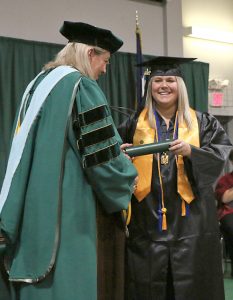